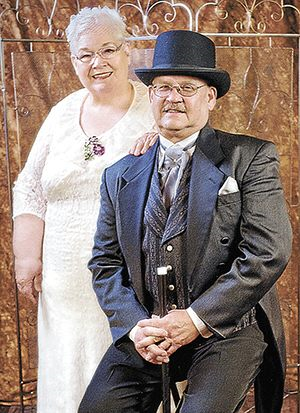 The Seventh-Day Adventist Church that”s preserved at Prairie Village came back into use earlier this month when a Howard couple renewed their marriage vows within its walls.

Kevin and Sharon Swenson of Howard renewed their vows on Oct. 15 to honor their 15 years of marriage, holding the ceremony inside the small church that they had worked at renovating during the last couple of years.

According to Sharon Swenson, she and her husband, who are Seventh-Day Adventists, had decided to spruce up the 131-year-old church several years ago.

The Swensons renovated the buildings” interior during 2012. This year, the work included Kevin Swenson painting the church”s exterior and tending to the garden and grounds surrounding the building.

According to Lake County”s history, the Ash Grove Seventh-Day Adventist Church was established in the northwestern area of Nunda Township in the early 1880s. The church was moved to Prairie Village about 50 years ago.

Sharon Swenson said the Rev. David Graham traveled to Madison from Appleton, Minn., to officiate the couple”s vow-renewal ceremony. The event was attended by best online casino about 17 persons, many from outside South Dakota.

She said she and her husband wore late 1800s-period clothing styles for the ceremony. Sharon Swenson assembled her dress and Kevin Swenson wore formal clothing provided through a Mitchell costume shop.

According to Sharon Swenson, the couple is especially grateful to Stan Rauch, Prairie Village”s executive director, for temporarily opening the historical preservation site for their ceremony. Prairie Village”s operating season typically runs from Mother”s Day to Labor Day. Sharon Swenson also offered her appreciation to the staff at the Sample Our Flowers flower shop in Madison for their assistance.