By JANE UTECHT Staff Reporter courtesy Madison Daily Leader
GOOD HEAD OF STEAM — The Prairie Village, Herman & Milwaukee Railroad steam engine #29 took five laps around the village last Sunday in preparation for this weekend’s Railroad Days. Volunteers have been working on the 1944 engine for many years to get it to this stage. 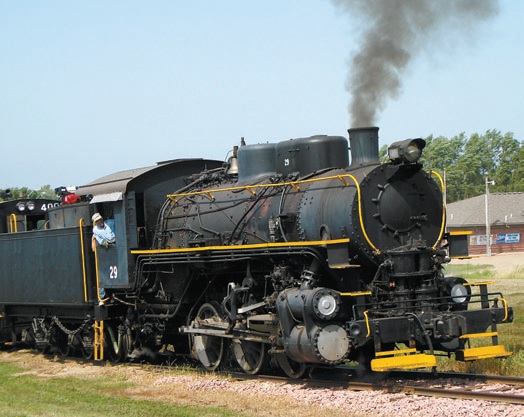 Talk about a labor of love.
The 1944 Lima steam engine at Prairie Village is not much older than the diesel engines the attraction owns, but a lot of features are wearing out on the 70-yearold machine.
A steam engine can be “terrible to keep running,” said Prairie Village volunteer Bill Nolan. “So many things can go wrong,” he said, and there are “so many safety issues.”
The restoration work can be expensive as well. That begs the question: Why have one?
Nolan’s answer is simple: “It’s a passion. We don’t need to have one; we just like to have one,” he said.
Nolan has had that passion since he was young, joking that when he was born, instead of slapping his bottom, the doctor put a steam hose in his ear and he’s been hooked on steam ever since.
When listening to the steam trains go through his hometown of Brookings, “I would get goosebumps.”
But a steam engine “fits well with the historic perspective of Prairie Village,” said Prairie Village volunteer Bob Gehringer.
SparkNotes.com says that during America’s expansion westward 100-plus years ago, railroads “brought 2.2 million foreign immigrants to the trans-Mississippi west,” not to mention the freight they carried.
With that history, #29 is a draw for the village.
“We get a lot of hits on the website because of the train,” said Gehringer. “So few are running anymore.”
He said that #29 “will attract people from several states” for this weekend’s events.

ENGINEER BILL NOLAN, a Prairie Village volunteer, is one of two volunteers qualified to sit in the engineer’s seat on Prairie Village’s steam engine #29. The engine has moved under its own power two summers in a row. 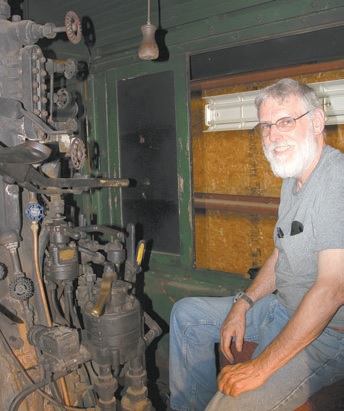 Nolan said that between the 1880s and 1900s, a lot of subtle things were engineered for trains, such as air brakes, which were huge for safety, and injectors to refill the water tanks.
“The most important feature is the water level,” said Nolan. “The engineering involved in these is just incredible,” Nolan said, due to some “very brilliant people.”
A toolmaker by trade, Nolan will happily explain those marvels to guests at the village.
The #29 is a 0-6-0 engine, the first “0” because there is no pilot wheel in front, “6” for the six driving wheels and the last “0” because there are no trailing wheels.
Bigger engines, Nolan said, have huge fire boxes so they need the trailing wheels, and pilot wheels help steer on curves. The contour of the wheels and the track is another innovation. Then there are the physics concepts developers had to consider, such as the relationships between mass and energy, and conversion of heat energy to speed.
This fascination with the history and engineering are why the volunteers at Prairie Village have been putting in time and effort over the last 14 years to get the locomotive running.
Most recently, they had the compressor rebuilt at the Black Hills Central Railroad in Hill City. Wrigley Mechanical of Fargo, a company certified to work on pressure vessels, has been here several times to work on safety and leakage issues with the boiler. It is built for 190 pounds of pressure, but runs at about 165 at Prairie Village.
“For the short track, that’s more than enough,” Nolan said.
Their efforts paid off last Sunday, when they were able to take #29 out of the roundhouse and run five times around the village’s two-mile track.
“It was exciting,” Gehringer said. “It’s been close to 14 years since this thing has run consistently.”
“With railroading, the biggest central feature is safety,” Nolan said, so they have yet to decide if #29 will pull passengers this weekend. But there will be plenty of activities even if the steam engine is only on display for Railroad Days.
There will be train, motor car and doodlebug rides at the Depot and carousel rides at the Gift Shop.
Food is available on Saturday from 11 a.m. to 1 p.m., courtesy of the Ladies Auxiliary. The pizza train runs on Saturday at 6 p.m., but reservations need to be made by 2 p.m. by calling 256- 3644. And on Sunday, hobo stew is available from 11 a.m. to 1 p.m., or as long as it lasts.
For the soul and spirit on Sunday, church services are offered at the Junius Church at 8 a.m. and on the Chapel Car Emmanuel at 10 a.m. The South Dakota National Guard Mission Essential Brass Band will be playing on Sunday at the Depot at 12:30 p.m.