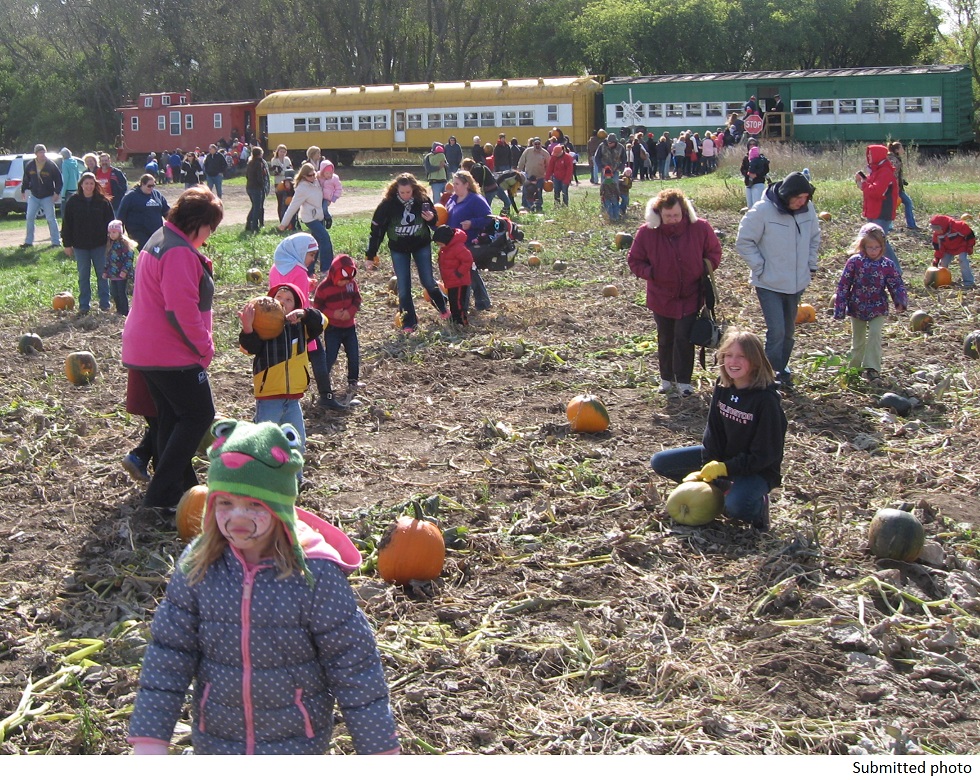 GREAT PUMPKIN! This fall’s Prairie Village Pumpkin Train on Saturday was a record breaker. Village Manager Stan Rauch said that 646 children under age 12 came out to ride the train and pick a pumpkin. He estimated that about 1,000 adults and teens attended the event as well, and credits the sunny weather for the good turnout. This shatters the old record of 492 set in 2012. Donations at the event went to the Carousel renovation project.

By JANE UTECHT Staff Reporter courtesy Madison Daily Leader
Prairie Village’s annual Pumpkin Train made a special run on Saturday morning for a special young boy.
Five-year-old Tayden Grohs of Egan has been battling brain cancer, classic medulloblastoma, for a little more than a year. The cancer was considered in remission but came back this summer.
Tayden’s mom, Danielle Grohs, said the cancer is not curable, but they are continuing chemotherapy treatments while they look for research options. The treatments have slowed the progression of the disease, she said.
Tayden’s dad, Trevor Grohs, said he takes the procedures well.
He’s a trooper, he said. Trevor explained to Conductor Marlin Fenner that his son really likes trains and tractors. He’s big into Thomas [the tank engine].
Tayden had ridden the pumpkin train two years ago and still talks about it, said Danielle.
Since he is now on chemo, riding the train during cold and flu season is dangerous for Tayden, Danielle said. The tumor has affected Tayden’s motor skills and he can’t walk, making it a struggle to get Tayden around with many other children.
The family contacted Prairie Village to see if they could run a special train for their family. Prairie Village manager Stan Rauch said they don’t get many requests for this type of thing. We’re happy to do it”, he said.
The Grohs family was joined by about 20 family members cousins, grandparents, great-grandparents on the early-morning train. 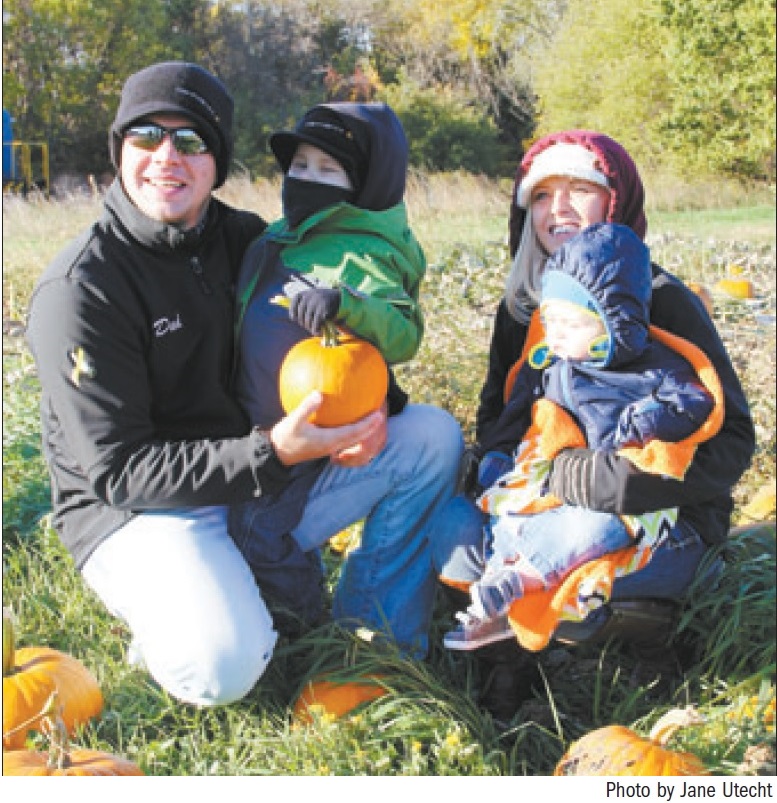 SMILES FOR PUMPKINS Five-year-old Tayden Grohs, held by his dad Trevor, gets a special train ride at Prairie Village on Saturday to pick out his own pumpkin. His mom Danielle holds little brother Trace. Tayden is dealing with brain cancer but loves trains, so the village ran a special train for Tayden and his family.

The special run means a lot to the family, Danielle said. It’s a way for them to do something their family would normally do, if Tayden didn’t need extra precautions; he needs to stay away from germs.
The surprise was a thrill for Tayden. His parents hadn’t told him where they were going, but when they pulled into the village, he knew where they were.
He said ‘Trains!’ and then saw his family there and said ‘Cousins’! Danielle said. Tayden even got to ride in the engine on the way back from the pumpkin patch and to blow the train whistle.
George Lee, Prairie Village board president, told the family, We’re happy to have you folks here. He and Fenner each presented Tayden with a train whistle.
The family has a Facebook page for updates, Team Tayden, highlighted with gold, the ribbon awareness color for childhood cancer.