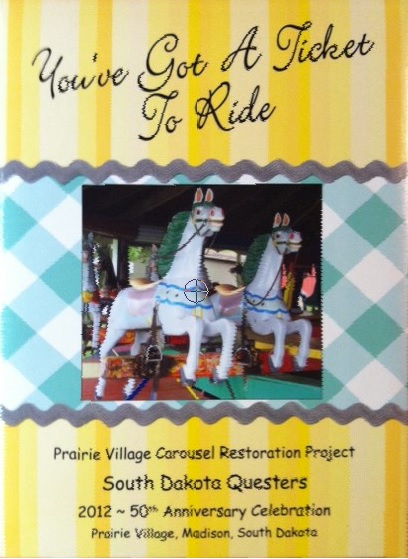 Prairie Pasque Questers will be selling cookbooks at Mart in the Park later this month. Proceeds from the books will help with the renovation of the steam-powered carousel at Prairie Village

The steam-powered carousel at Prairie Village is in rough shape — something to be expected since the ride is more than 100 years old. But to keep the attraction in good condition for the next century, an area group is working to restore the local treasure by raising money with cookbook sales.

The cookbook, “You”ve got a ticket to ride,” has hundreds of “recipes from everyday kitchens,” said Mickie Kreidler, vice president of the Prairie Pasque Questers, the group which has adopted the carousel as its project.

Cookbook sales over the last year have been very successful, Kreidler said, and the book is now in its second printing. Looking for more success, the Questers will have the books for sale at Madison”s Mart in the Park on July 27.

Kreidler hopes strong sales continue because they have big plans for the carousel. All 28 horses and the two chariots need some degree of restoration, making the total pricetag around $280,000. Other facets of the project include the mechanical works which are showing signs of wear, a new concrete slab for the ride”s foundation, and a new building to house the ride.

With such big plans, Kreidler wants to promote awareness of their quest, so she would like interested individuals or groups to know that they may adopt a horse. That pricetag will run about $7,500 per horse. Two horses have been “adopted” after a year of fund-raising. Kreider is also able to talk to groups about the project.

For those in the virtual world, the Questers are working on a website for information and donations. The group is hoping all the horses will be sponsored in another year. Restoration will take a year also, and will be done by Carousel Works in Ohio.

There are many worthy Prairie Village restoration projects. What makes the carousel project extra special is difficult for Kreidler to define in words.

“It”s a magic, or a presence, or a feeling,” she said, that makes the carousel worthy of the effort. The carousel itself is unique. First, the operating mechanism is underneath instead of above the animals. Plus, it is one of six or seven made by the Herschell-Spillman Company that is still in existence today; it is the only one that is open for public rides on a regular basis.

The cookbooks cost $15 and are available from any Prairie Pasque Questers member, at the Prairie Village gift shop, or at the Mart in the Park during Discovery Day.