By CHUCK CLEMENT, Staff Reporter courtesy Madison Daily Leader
The number of entries for this year’s South Dakota Home Baked Pie Contest, held on Thursday at the Prairie Village threshing jamboree, was down from 2013, but the bakers who submitted their entries for judging offered three pies that each contained some creative magic. 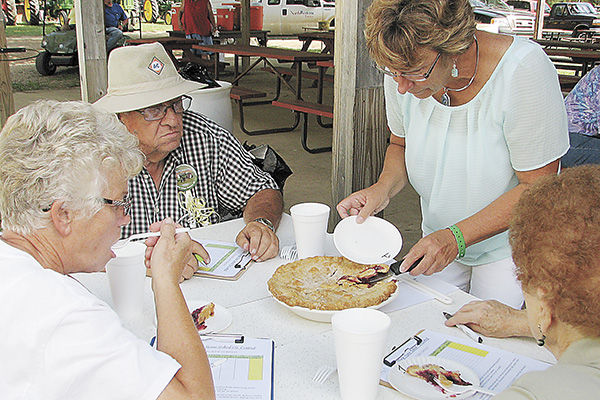 Photo by Chuck Clement
KATHY PHELPS, the pie-contest coordinator at Prairie Village, serves up judging samples for the winning “rubaberry” pie entry during Thursday’s contest held at the Auxiliary Kitchen. The judges for this summer’s South Dakota Home Baked Pie Contest were Myron Downs of Madison, Aggie Kroeger (left) of Lennox, and Delores Arbeiter (right) of Marion.
In the end, the three contest judges awarded Ruth Overby of Mellette first place for her “rubaberry” pie, a dessert concoction having a filling of rhubarb and blueberries.
Dana Hanson of Nunda took second place with her chocolate french silk pie. JoAnn Rostyne of Madison placed third with her “cran-apple” pie entry with its filling that included cranberries.
The three judges for the 2014 contest — Delores Arbeiter of Marion, Myron Downs of Madison, and Aggie Kroeger of Lennox — met midafternoon at Prairie Village’s Auxiliary Kitchen ready to test the desserts with their taste buds.
Kroeger offered testimony to the quality of the entries by telling another Prairie Village volunteer who was passing by the judges’ table, “They sure are good…They sure are good.”
The pie-contest judges officially critiqued the dessert entries in four main areas — overall appearance, crust, flavor and filling. If a tie in points did occur in the main areas of judging, tiebreaker points were awarded for creativity, appearance, or use of ingredients.
Kathy Phelps, the pie-contest coordinator, pointed out before the judging started that Overby’s rubaberry pie was prepared in an unusual way. As part of her recipe, Overby tells bakers to ready the dessert for the oven and then “…bake in a brown paper bag 400 (degrees) 15 minutes (then) reduce heat to 350 (degrees) for 40 minutes or until brown…about 55 baking time 8 (servings)”
According to Phelps, interested cooks and pie-eaters will find the contest results and winning recipes online at www.prairievillage.org.
The entry numbers for this summer’s contest fell to three pies after the 2013 pie-judging event drew eight entries. Phelps said Thursday’s judging was held a bit earlier in the day compared to previous contests and that scheduling may have made pie-baking for the contest a challenge for some cooks.
Interested cooks will find that organizers have no fee that they charge to enter the contest, but pie-bakers do need to fill out a registration form gathered from the Prairie Village office or the Prairie Village website. Then the next step for the entrants involves bringing the completed entry forms, their recipes and baked pies to the auxiliary kitchen during the Thursday start of the Prairie Village jamboree.
The pie-baking contest is scheduled in conjunction with the appreciation supper held for the Prairie Village board of directors. The pie contest awards are $20 for first place, $15 for second place, and $10 for third place.