It will not be ready for Sat. Pumpkin Train 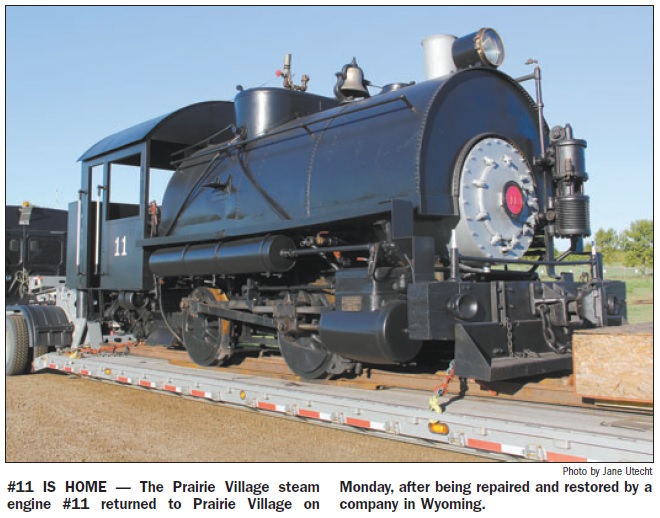 Number 11 is back where it belongs — at the Prairie Village Herman & Milwaukee Railroad.
“It’s great to see #11 come back home,” said village manager Faron Wahl.
The 1924 Alco steam engine had been shipped to Wyoming late last year for boiler work and other repairs and testing.
It returned on Monday, brought in on a semi flatbed; a crane lifted the engine off the trailer and back onto the village tracks.
“It looks way different from when it left here,” said railroad volunteer Steven Boer.
Volunteer Bill Nolan said the crew at Wasatch Railcar Repair Contractors in Cheyenne, Wyo., put new tube sheets in the bottom half of the boiler, built an all-new cab and replaced the front beam which supports the coupler.
The workers also changed the brake system from steam to air.
The brakes work, but the engine’s single-cylinder air compressor is not working, so that part may end up being sent to Hill City for the 1880 train crew to repair.
Other than that, “Everything looks beautiful,” Nolan said, with the engine’s new paint job.
Volunteer Harold Boer said the engine “looks real nice” and “should be in good shape for running next year.”
The #11 will not be ready for Saturday’s Pumpkin Train, which runs from 11 a.m. to 4 p.m. Proceeds from that event go to another village attraction, the carousel.
The nice thing about #11, said volunteer Bob Gehringer, is that it has a short wheel base which will go around the corners better on the two-mile Prairie Village track.
The little engine also pulls different cars and uses different couplers than the big steam engine #29.
This engine and passenger cars are called “Deadwood cars,” he added, as #11 was purchased from the Historic Deadwood Central Railroad.
The 0-4-0T engine carries its water and fuel (either coal or wood) on the engine itself, instead of on a tender, as #29 does.
Fully loaded, it weighs about 35 tons; empty it’s probably 25-30 tons, Nolan estimated.
To load the engine last December, Barnhart Crane and Rigging Company had used a 100-ton crane; this week they brought in a 70-ton crane.
The crane itself weighs about 48,000 pounds. They had the 196-foot boom out about 60 feet, said Charlie Walters, crane manager.
Knowing that weight and watching the crew “lift it like a toy” was “quite the thing,” said Wahl.
He was hired after the engine was moved to Wyoming, so he did not see it loaded for the trip west, but the significance of the moment didn’t escape Wahl.
“The real-life towns and villages that Prairie Village emulates were founded almost exclusively by railroad,” he noted. “To offer such an authentic re-living and reproduction of that railroad here in Prairie Village is an unusual but wonderful way to tie it all together.”
The village will now be in a position next summer to offer rides on two live steam locomotives, a “phenomenal step forward for Prairie Village,” Wahl added.
Funds for the transport and repair came from an anonymous donor.