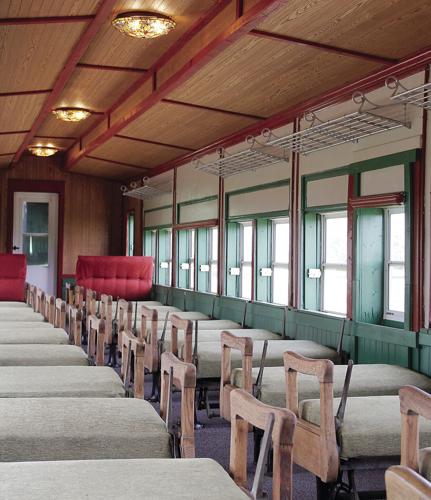 Passengers will get a more authentic experience this year when they ride the yellow car on the PVH&M Railroad at Prairie Village.

“The inspiration for this were the seats out of the State Fair car,” said Bob Gehringer, a Prairie Village volunteer who serves primarily on the railroad committee. The State Fair Special, a 50-ton combination car constructed in 1909, was sold to Tristan Scott of Ethan last year.

Bench seats from that car, which carried passengers, baggage and mail in its heyday, have been installed in the refurbished passenger car, replacing the tables and chairs which were previously used. Volunteers have done the restoration work.

“We got the benches done. We’re still working on the backs,” Gehringer said.

While a team of volunteers has been responsible for much of the work, one man took responsibility for the armrests on the seats: Gary Johnson.

“He stripped them all, hand-sanded them and put them back together again,” Gehringer reported.

Work on the passenger car is just one of several tasks undertaken this year. Work on the track continues. A professional crew will come in to pull up about 400 feet of track, grade the railbed, relay the track and then shore it up with crushed rock.

“We did three sections of track ourselves,” Gehringer said.

Work on the track is necessary because in recent years, the track has been sinking into the original railbed.

In addition, two of the caboose cars have been recently sold.

“We have much more stuff than we can maintain,” Gehringer reported.

Although the engines are stored in the roundhouse, cars are stored on side tracks where they are not protected from the elements. When the decision to sell the cars was made, they were advertised on Facebook Marketplace.

“A lot of people were interested, but they gave up when they found out how much it cost to move one,” Gehringer said.

House movers were needed to move the State Fair Special last year. Despite some buyers losing interest, offers were received and accepted on the two cars.

Part of maintaining the railroad is training new volunteers to step into some of the roles. Last week a senior at Brandon Valley, Miles McDaniels, was working with Gehringer to prepare one of the diesel engines for use this year.

McDaniels started volunteering last year and is learning routine tasks, such as the proper way to throw a switch in order to avoid injury. He is also becoming familiar with the engineer’s role by shadowing the trained volunteers.

“I don’t drive, but it’s fun being up there,” he said about riding the engine. In the fall, McDaniels will be studying mechanical engineering at the S.D. School of Mines and Technology and interning with the 1880s Train in Hill City.

The train at Prairie Village runs at 2 p.m. every Saturday through the season with more than one ride being offered if there is enough interest. The train will also run on Sunday twice during the season – on Father’s Day and during the Jamboree.

Most weeks a diesel engine will be used. However, a steam engine will run on Railroad Day, which is Aug. 6, and during the Steam Threshing Jamboree. The committee may also run steam on other weekends if there are sufficient volunteers with the time necessary to prepare the steam engine for use.