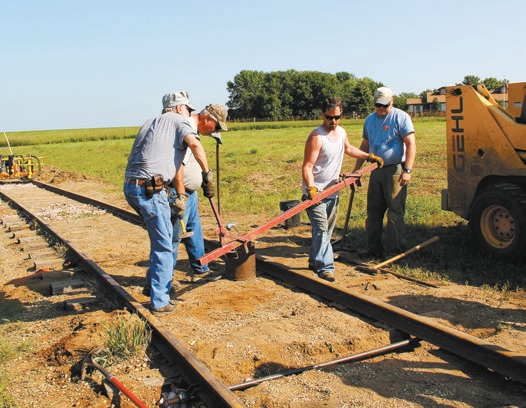 Photo by Jane Utecht
It was a “good Railroad Days,” said Prairie Village Stan Rauch, despite a little hiccup in the plans.
Most of the weekend’s events went on as expected at the historic village west of Madison. Not on the planned list of activities was what Rauch called a minor derailment, at least in the grand scheme of derailments, he said.
On Saturday afternoon, steam engine #29 was pulling a passenger car around the village’s two-mile track and a railroad tie gave way, causing the spikes to pull out and the rails to pull apart by about three inches. The wheels then dropped to the inside of the rails.
Volunteer Bill Nolan said the 77-ton locomotive was pulling the tender car and the green passenger car. There were no injuries and no damage to the rail cars, but the track needed repair. Nolan said that the ties were laid in 1989, and they were used when they were installed. Rauch added that the tracks are regularly inspected.
Surrounded by a crowd of spectators, Prairie Village volunteers worked to get the cars back on the rails and moved back to the roundhouse, then took to the task of replacing rails for the rest of the day.
Crews finished the job on Sunday morning, after replacing ties and two rails, so that rides went on as planned on Sunday afternoon with the diesel engine.
Even Saturday night’s Pizza Train went on as planned, Rauch said, taking 56 diners on a modified rail route around the village, something of a back and forth half moon, volunteer Kelli Wollmann said.
Rauch said the village has a good supply of railroad equipment to do repairs, but he had the most praise for the volunteers who have the knowledge to make the repairs and the willingness to give of their time.
The derailment made for interesting conversation on Sunday, when volunteers dished up over 100 plates of Hobo Stew and the 147th Mission Essential Brass band played for the crowd.
Daniel Pelletier, visiting from Ellendale, N.D., said watching the volunteers do the repairs was ver y interesting.
Rauch said it is way too soon to speculate if #29 will run at the Jamboree, but since it is heavier than any other equipment they run on the rails at the village, he suspects the railroad volunteers will be taking an exceptionally close look at the tracks before the August event.