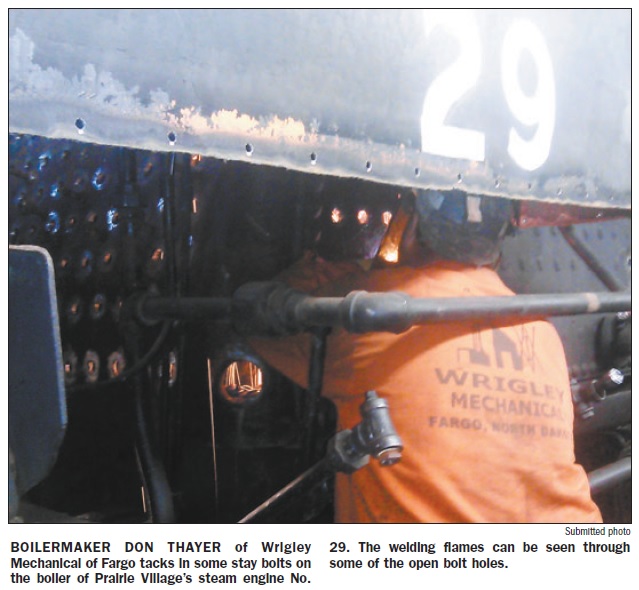 By JANE UTECHT, Staff Reporter
After 70 years of hard work, it can be time for a little nip and tuck.

This can be true for some people, and for steam engines like No. 29, the Prairie Village, Herman and Milwaukee line’s lone steam engine.

No. 29 is almost 72 years old, having been used by the Army in World War II and as a switching engine for several civilian lines after the war. It came to Prairie Village near Madison in 1976.

No. 29 is “a phenomenal engine,” said Prairie Village volunteer Bill Nolan. “They were very efficient machines.”

The village has used the engine off and on over the years, but volunteers have been putting forth a concerted effort over the last few years to get it back on the rails.

It ran this summer at the 2014 Threshing Jamboree and the 2015 Railroad Days, but some leaks developed on the boiler. That “prompted concerns about safety,” said Nolan.

He explained that pressure in the water jacket is “superheated to 160 pounds of pressure,” so the boiling point is about 350 degrees. Any exposure to the atmosphere can cause it to explode, he said.

To take care of the leaks, the village railroad volunteers called in Wrigley Mechanical from Fargo, N.D. They are “excellent, hard workers,” Nolan said, who are well-qualified with “specific training to work on pressure boilers.”

Wrigley welder Don Thayer does a lot of work on boilers at North Dakota sugar beet plants. Boilers there can be “13, 14, 15, even 18 stories high,” he said.

It does take a little getting used to the old steel of the boiler on No. 29, but it’s still a boiler, Thayer said. “They’re not too much different.”

Thayer replaced some of the original 3/8-inch steel on No. 29 and many of the stay bolts.

Stay bolts hold together the two walls of the water jacket; the original ones were threaded through the metal at 4-inch intervals. Some of these started leaking this summer, so Thayer and his co-worker replaced the original threaded bolts with bolts that are welded in.

This was an “enormous undertaking,” said Nolan. 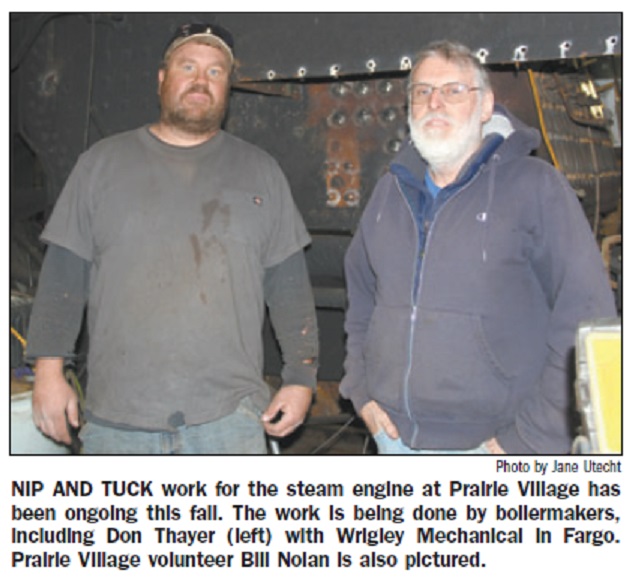 Stan Rauch, manager of Prairie Village, said funding for the project is coming from an anonymous benefactor, as well as the village itself.

After testing the boiler earlier this week, Prairie Village volunteer Bob Gehringer said that some smaller issues showed up — a few more leaks in some more original stay bolts.

With cold weather setting in and the high demand for Wrigley’s boilermakers, more work may have to wait until spring, he added.

Over the last few years, Thayer has made a few trips to Madison to work on No. 29. They don’t do a lot of work on old steam engines, Thayer said. In fact, “I never paid attention to steam engines until I started working on them,” but “they’re pretty cool.”

That variety of jobs is one of the things he likes about his work.

“I worked in a shop for a little while” as a welder, he said, but there are “night and day differences” between factory welding and being a boilermaker.

“There’s a lot of work involved” as a boilermaker, but there is variety in the work. “It’s probably 30 percent welding and 70 percent other stuff,” he said.

“I like my job, and I like the fact that I work out of the truck,” Thayer added.

With the Career and Technical Education emphasis currently going on in South Dakota, Thayer said that there is a great demand for welders and boilermakers.

“Our union hall is busy now,” Thayer said. Boilermakers Local 647 has about 800 members, he added, but is short-handed, so they are taking apprentices in their four-year apprentice program.

It’s hard work but a good profession. “You can make some good money and have a phenomenal retirement.”