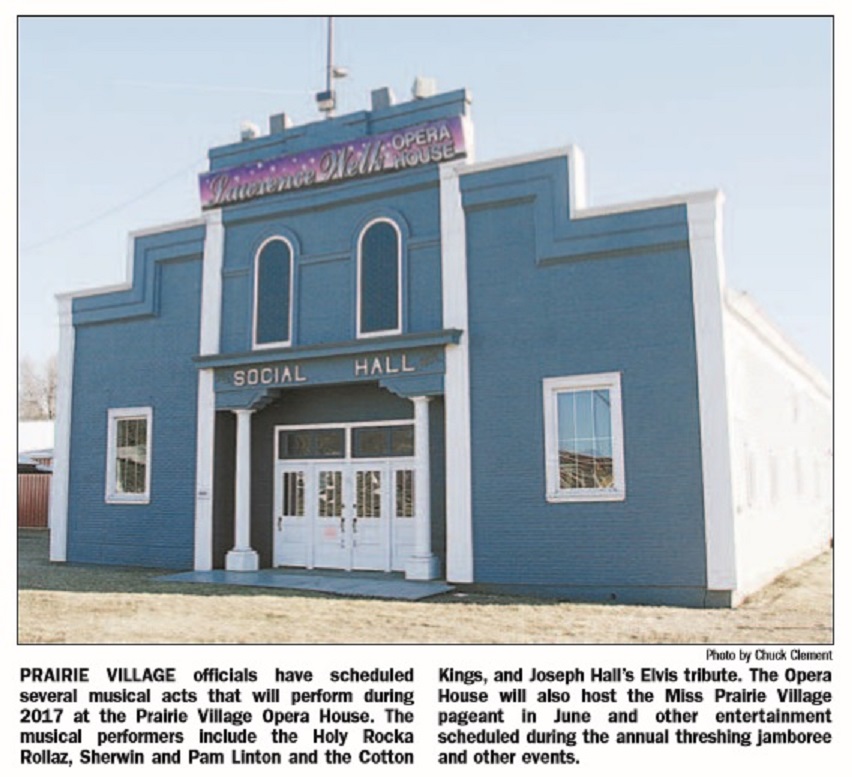 Prairie Village will work with the classics — Elvis, Buddy Holly and Johnny Cash — throughout this summer’s entertainment schedule when it opens this May, and its staff expect to welcome plenty of visitors to its concerts, events, campsites and, of course, annual threshing jamboree.
May 7 marks the opening day for Lake County’s historical preservation site located between Madison and Lake Herman. However, business at Prairie Village will already have started the day before with the annual consignment auction scheduled on May 6. Previous spring consignment auctions have required teams of auctioneers, and Prairie Village organizers don’t have a reputation of turning away individuals who want to auction-off their property.
Prairie Village will see its share of young visitors even before it hosts its spring auction because area elementary schools will receive invitations to have their students participate among tours held in early May.
In 2017, Prairie Village will remain open from May 7 through Labor Day, Sept. 4 with the site operating Monday-Saturday from 10 a.m.-5 p.m. and on Sundays from 11 a.m.-5 p.m.
During the summer season, the train crews with the Prairie Village, Herman and Milwaukee are scheduling train rides each Saturday at 2 p.m. Faron Wahl, Prairie Village’s manager, said that he continually has visitors asking him whether the PVH&M Railroad will offer steam locomotive-driven rides from either of the site’s two steamers, the No. 11 and No. 29.
“It takes a lot of work for our people — and they’re hardworking volunteers — to get those steam engines ready for their runs, but we also know that our visitors really want to see those steam locomotives,” Wahl said.
The 2017 Miss Prairie Village and Miss Prairie Princess will emerge from the Prairie Village Pageant scheduled on June 4 and held in the Lawrence Welk Opera House, originally known as Oldham’s Socialist Hall. The pageant conducted for teens and preteens serves as the opening event for the old social hall.
Young cowboys will try to hold on for 8 seconds while riding their bulls during their June 9 visit to Prairie Village that’s part of the Northern Bull Riding Tour. The Madison stop for the tour typically draws sizable crowds wanting to see cowboys manage their rides on four-legged thunderstorms and twisters.
This year’s edition of the Prairie Village Variety Show is planned for June 25, and show attendees will probably approve of the air-conditioned environment inside the old Opera House that can be had during the show. Wahl said the variety show attracted regional sign-ups that included vocal and instrumental musical acts, cowboy poetry, comedy, dance routine, and a local hula-hoop that impressed the crowd.
“All of us that organized the show were really pleased with the significant variety that we were able to have in the variety show,” Wahl said.
The shows at the Opera House continue with the July 1 performance of the Holy Rocka Rollaz from Minnesota, a band that specializes in rockabilly music made popular by Buddy Holly, Chuck Berry and Elvis Presley. The three musician rock ’n’ roll band has played in venues ranging from the state fairs in Minnesota and Missouri to the Redlin Art Center in South Dakota to the South Dakota State Penitentiary.
The Holy Rocka Rollaz are part of Prairie Village’s Railroad Days held on July 1-2. Prairie Villages train rides are priced at $4 each with children age 3 & under riding for free. Family train passes are sold for $15 providing rides for up to five family members. The PVH&M motorcar and doodlebug rides offered during Railroad Days and the annual jamboree are priced at $4 per passenger.
Sherwin and Pam Linton and the Cotton Kings will perform a concert on July 29 in the Opera House. The Lintons and the Cottons Kings, a Twin Cities-based act, have provided an annual entertainment venue of Country & Western music at the South Dakota State Fair for decades. Sherwin Linton is well-known for his live performances of Johnny Cash’s songbook.
The 24th annual Madison Car Show is scheduled on Aug. 6, providing a lead-in for the 55th annual Steam Threshing Jamboree on Aug. 24-27. Allis-Chalmers will serve as the featured tractor brand during the four-day event that includes tractor pulls, classic vehicles, opera house entertainment, and steam driven tractors.
Prairie Village plans to close on Sept. 4, but the Opera House will welcome Joseph Hall’s Elvis Rock ’n’ Remember Tribute on Sept. 16. Hall gained notoriety in 2008 when he placed among the top 10 finalists in NBC’s America’s Got Talent show. He has performed his Elvis act during six seasons in Branson, Mo.
“His show was well-received last year, and people in the audience asked if they could see him again,” Wahl said.
Season-pass holders cannot use their passes for the three Opera House concerts performed by the Rocka Rollaz, the Lintons, and Hall.
To get ready for Halloween and Thanksgiving, Prairie Village will invite children and their parents to ride the Pumpkin Train and collect a special orange pumpkin to decorate their homes.
The final late-in-the-day Prairie Village gate admissions are collected at 4 p.m. Daily admissions are set at adults at $5, children ages 612 at $2, 5 and younger free, and senior over 55 at $4.50.
However, for the threshing jamboree, admissions are set at $10 daily for adults, except for $12 on Saturday. A four-day pass will cost $30. Children from ages 6-12 will pay $2 daily with a four-day pass costing $7, and youngsters 5 & under can go through the gates for free.
Daily carousel rides are priced at $2. Prairie Village camping is available April through early October on a weather-dependent basis with electrical sites at $21 nightly and nonelectrical sites at $17 nightly.