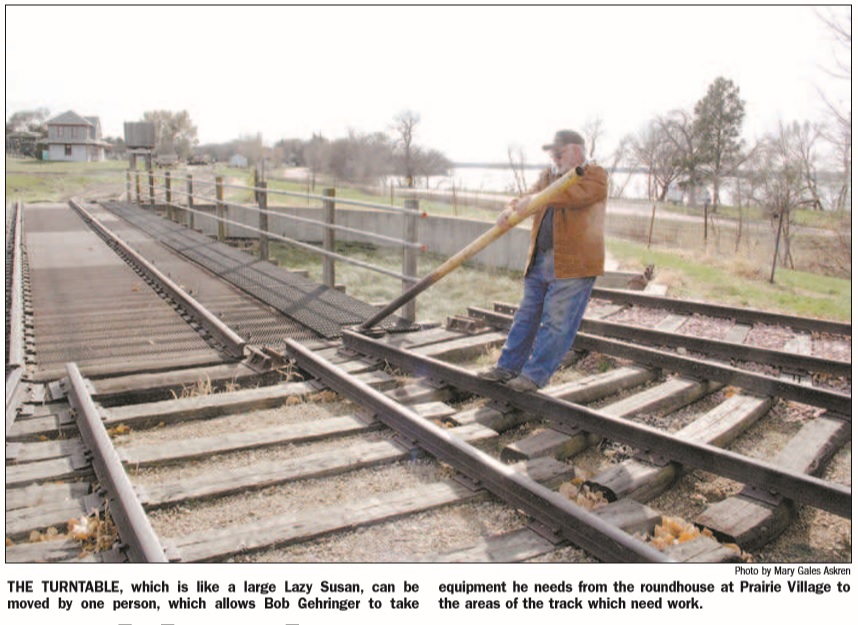 By MARY GALES ASKREN Staff Reporter
The season has ended, but activity continues at Prairie Village as volunteers tackle the to-do list of maintenance tasks necessary to keep things on track — literally.
“Track work is a constant issue,” Bob Gehringer said on Tuesday afternoon, taking a break from the work he had been doing for several days.

As a member of the railroad committee, he’s one of a team of volunteers who work on the track as time permits. As a retiree, he admits he has more time than some. This week, he was tackling a project he felt he could do on his own — lifting a section of track and putting down more ballast.
Gehringer said he could do maintenance on this section by himself because of the work done four or five years ago by a team of 15-20 people. “It seemed like we did a good job at the time, but it wasn’t good enough,” he said.
The problem volunteers are working to address is a simple one: the track is sinking. With a train running every weekend during the season as well as for school tours and special events, the track has seen a great deal of use over the years.

As a result, the gravel which was laid under the tracks has migrated to the top and the ties have sunk. When this happens, the spikes work loose and the rails spread. Since a train is designed to travel on the rails, this becomes a problem.
Gehringer said a gauge rod can be used to prevent the rails from spreading, but this is a short-term solution. A better solution is to reconstruct the line section by section.
“It’s labor intensive and we don’t have many people who can do that kind of work,” he said.
Volunteers have to take out one of the rails, remove the ties, take out between four and six inches of soil, replace that with crushed rock, known as ballast, and then reconstruct that portion of the line. During the season, they have no more than four or five days in which to do a section, because the train is in use every weekend.
“At the rate we’re going, it will take 20 years to get all the way around,” Gehringer said.
Once a section of track has been reconstructed, the work isn’t finished. As the rock settles, additional work may be necessary. For example, a tamper may be used to push additional rock under the ties, or the ties may be lifted if the track isn’t level — or the tilt is wrong on the curves — so that more rock can be pushed under them.
“We do what we can in the spring and winter when we’re not running the trains,” Gehringer said.
Currently, there are 10 to 12 33-foot sections that are in desperate need of work and another 50 sections that need work in the near future, he said.
“At the rate we’re going, it will take 20 years to get all the way around.”
BOB GEHRINGER Railroad volunteer
At this time of year, the locomotives are also being winterized. With the diesel engines, this means plugging in the block heaters and putting an additive in the fuel so the diesel doesn’t gel.
However, with the steam engines, a little more is involved. The firebox is emptied, and the belly plugs are removed so the water can be drained from the tanks. Weep raps are shoved into the openings to wick out any water that may have settled on the bottom of the tank, and all of the valves are opened.
“Anyplace that water could collect in a steam line we have to open so the water will drain out,” Gehringer said.
In addition, repairs are made. This year, Gary Bensman, owner of Diversified Rail Services in Chattanooga, Tenn., examined the No. 11 engine because those who ran the train during the season weren’t satisfied with its performance.
He identified several issues with the 1924 Alco which will be addressed over the winter, according to Gehringer. The outer rims of the pistons had been worn down and will be sent to a machine shop to be built up.
“There was some leakage on the piston rods, and he [Bensman] had enough experience to recognize the issue,” Gehringer said.
In addition, the main steam valves and the main throttle valve need lapping, and a petticoat-pipe will be installed in the smoke box. Ideally, in a steam engine, the exhaust steam shoots through the stack as a means of regulating all of the various factors that affect power and speed. The petticoat pipe, which is shaped like a cone and placed over the discharge nozzle, enables this to happen.
Currently, the No. 11 doesn’t have a petticoat pipe. As a result, the steam just dissipates in the smoke box which affects the way the engine performs.
For those who are old enough, knowing a steam engine needs a petticoat will undoubtedly bring to mind the name of a popular 1960s sitcom in which the train was a major mode of transportation: “Petticoat Junction.” Gehringer said that when members of the railroad committee view old episodes, they are amazed at the accuracy.
“The instructions they give [Bobby Jo] about running the locomotive are spot on,” he said.

While the program was entertaining and the trains at Prairie Village continue to delight a generation too young to remember it, it takes work to make this possible. Volunteers are always needed.
People can get involved by attending railroad committee meetings. The next meeting will be held at 9 a.m. on Saturday at 2nd Street Diner.
They can also volunteer by calling Gehringer at 605-2704085 or Janice Fenner at 605237-1805.

Previous Post: P.V. carousel will return in spring
Next Post: Work on No. 11 in progress at Prairie Village