Company will assess ride for restoration 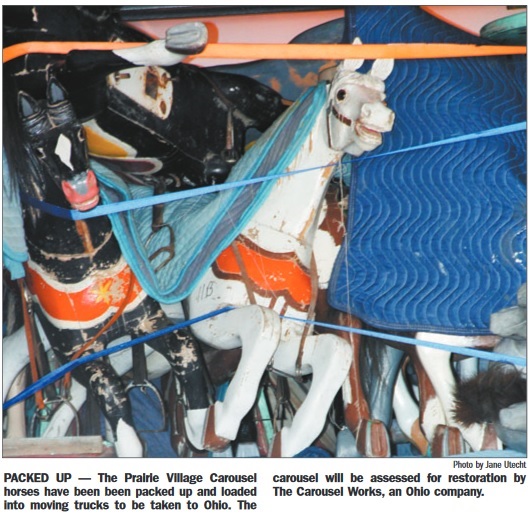 Years ago, carousels were often made to be taken apart and moved from town to town, like amusement park rides of today.
Instead of moving around, the Art B. Thomas Carousel at Prairie Village has been in one place for 50 years.
This week, however, the steam-powered attraction was taken apart by The Carousel Works company and now is on the move to its Mansfield, Ohio, woodworking shop.
Volunteers have long been working to restore the 116year-old ride, and Cecelia Wittmayer, a member of the Prairie Pasque Questers, is working on grant funding to help offset the cost of the restoration.
When Carousel Works looked at the carousel in 2011, Wittmayer said, they identified some “must repair and restore” items, including the horses and chariots.
“However, the visual inspection that was completed in 2011 couldn’t clearly identify the state of the mechanical components of the carousel,” she said. “Prior to the start of restoration work…Carousel Works will conduct structural tests on the horses and chariots and will examine all the mechanical components to identify those that should be repaired, restored or replaced.”
Work is likely to begin in late winter or early spring, she added.
Arrangements had been made with Carousel Works to come and get the carousel around the first of the year.
However, the crew was available to drive to Madison this month to pick up the carousel. They also indicated that dismantling and loading is much easier now than in the winter, Wittmayer added. 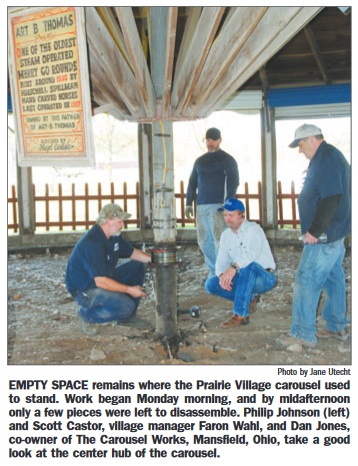 When the Carousel Works team came to Madison on Monday, Village Manager Faron Wahl was surprised with the efficiency of the crew.
The hand-carved wooden horses were taken down in about an hour. The shell covering the attraction was almost empty by the end of the day Monday.
Dan Jones, co-owner of Carousel Works, said the rides were usually pretty easy to take apart, “like a big erector set.”
The more portable ones had 12 sections, he said. They could be set up in half a day and taken down in less than that.
Prairie Village’s unit has 16 sections, so he wasn’t sure if it was made to be moved.
“This is big for a portable.”
But at the turn of the 20th Century, Jones said, each company had different ways of making them.
“This one’s unique because of the way it’s built,” he said, using a cable to turn the carousel and running on steam.
It is also unique because the 1900 carousel is listed as one of the 10 oldest carousels in the country, according to a USA Today article from March 2016. It is under consideration by the State Historical Society to be listed on the National Register of Historic Places.
Carousel Works started in Connecticut in 1986. Jones was then working in the home improvement business, but he was looking to make a change. By chance he met a woodworker, and they started the carousel company.
They have made about 15 complete sets over the last 30 years and numerous parts for other carousels. 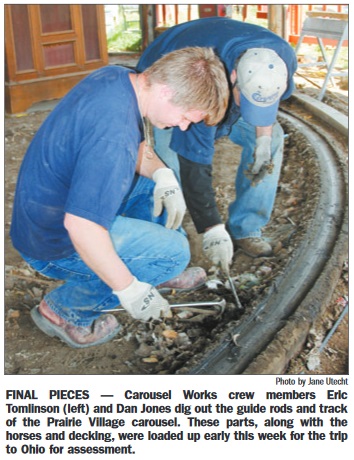