It was a standing room only crowd Sunday night for the first annual Prairie Village Variety Show. Eighteen acts graced the stage in the newly remodeled Lawrence Welk Opera House for the two-and-a-half-hour show. 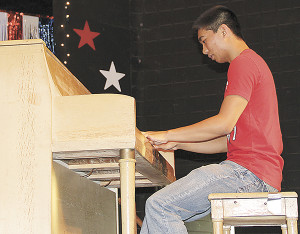 JAMES LUSK III of Watertown is representative of the talent performed at the opera house Sunday. Lusk came on the stage, sat down at the piano and with two fingers played chopsticks, the way most of us learned to play the first few times we sat down at the keyboard. He finished, stood up and took a bow, and stated to leave the stage. Stopping just short of the exit of the stage, he returned to the piano and played a dazzling version not only of chop sticks, but also the song “All of Me.” He received a rousing ovation for his professional performance.

Although the air conditioning left something to be desired — a huge fan was turned off because it made so much noise that it interfered with the sound system — people leaving the opera house at the conclusion of the program had nothing but good things to say about the show and the remodeling of the building.

“I didn’t realize we had so much local talent,” remarked one lady.

The show was not a contest, but rather a show for entertainers to showcase their talent. Money raised at the event goes toward preservation of the Opera House.

Behind the scenes were three volunteers who made the entire event possible. Bev Mader, Donna Mathison and Joel Brick were the mainstays, aided by dozens of other volunteers. Mader was the originator of the event. She has been volunteering at Prairie Village since 2002 when she became involved with the Miss Prairie Village and Miss Prairie Princess contests.

“I do it because I love to organize things, love music and just love the people,” she said. Organization is her specialty, bringing together the numerous tasks associated with pulling off a successful event. But she does so much more.

“Bev is a cleaner,” laughed Mathison. “If she isn’t working on an idea, she is on her hands and knees scrubbing something.” The evidence of her “clean broom policy” was the opera house, whose interior sparkled for the show.

Mathison, who teaches music at St. Thomas, Orland, Montrose and Canistota, besides being co-director of the Madison Community Band, has also been involved in volunteering at Prairie Village for many years. She too directed the Miss Prairie Village and Prairie Princess pageants for seven years. “I’d have to give much of the credit for the success of the variety show to the performers who volunteered to take part,” she said. “We didn’t have a single person turn us down.

“Lots of people are willing to help out at the village. And, there is always room for more. We welcome anyone who would like to help out.”

Joel Brick has been a mainstay at the village for years. With an extensive background in electronics, Joel has worked tirelessly to upgrade the public address system for the threshing show and other events. Using mostly his own equipment, Brick ran the sound system as well as performing on the violin at the show. He, too, praised the many people who donate time at the village.

“The board shouldn’t have to do all the work,” he said, “although many of them put in far more hours at Prairie Village than a hobby would require. When we embark on one of these projects we might not have a real clear idea of where we are going, but it always seems to pull together somehow.”

The three of them were unanimous in their praise of those individuals associated with the historic tractors that are the centerpiece of the annual Steam Threshing Jamboree at the village each year. The dates for this year’s show are Aug. 22-24. It will be the 52nd threshing show at the village.

“They are simply the backbone of Prairie Village. We couldn’t do it without them, especially during the jamboree. Volunteers spend thousands of hours at Prairie Village and we are most thankful.”

During intermission at Sunday night’s talent show, Mader made a special presentation to Rauch, a quilt donated by the Watertown-based Quilts of Valor group. The organization makes quilts that are donated to returning servicemen, most of them going to members of the military in hospitals. Several of the quilts were displayed at the opera house.

Rauch is a 23-year veteran of the Air Force, and one of the few pilots that flew the highly specialized U2 spy plane. He was presented the quilt for his unselfish service to his country, said Mader.