Prairie Village has a new addition. The long-awaited arrival of the Overby Machine Shop took place on Friday. 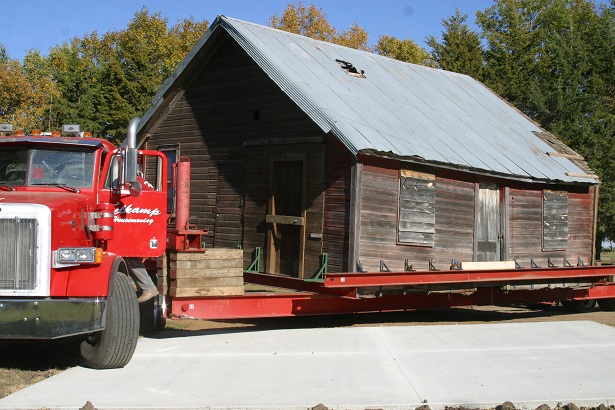 Telkamp Housemoving, Inc. of Brookings brought the nearly 100-year old machine shop from Mellette near Aberdeen to Madison. The moving company left at 8:30 a.m. and arrived at Prairie Village at about 4:00 p.m. On site for the arrival was Glen Overby and his daughter, Fran Gylling. Overby’s father John and uncle Theodore originally built the machine shop and purchased the equipment in 1913.

Prairie Village announced the addition of the building in 2010. Officials first anticipated its arrival that fall. Plans then changed with the hope of its arrival before the 2011 Steam Threshing Jamboree in August. A late installation of a cement foundation for the building, however, pushed back the arrival of the building until now.

The 24 X 24 foot building will feature a variety of equipment all purchased in the early 1900s through Sears & Roebuck for $701.

Equipment within the machine shop includes turning lathes, wood lathes and a combination piece that has a band saw, table saw, plainer and press drill all in one. Other items include a forge, trip hammer and large anvil.

Equipment within the machine shop is powered by a 6-hp gas engine connected to shafts that run across the upper part of the building.

Due to the size of the building, Overby said, his dad and uncle strategically placed their woodworking bench in front of a window so longer pieces of wood could be fed out through the window.

Overby said that he had used the equipment in the shop occasionally over the years. His hope is that the movement of the building will allow more people to see the building and what it was used for.

“We were fortunate to make arrangements to have it come to Prairie Village,“ he said. “We’ve known about Prairie Village a long time. We were looking for a place where it could get more exposure.”

A group of volunteers and family members has been doing fundraising to cover the cost of not only moving the building and its contents but also laying the cement foundation and ultimately restoring the building.

Overby said repairs are planned on the outside of the building and he hopes some of the equipment can be in working condition for the 2012 season at Prairie Village.