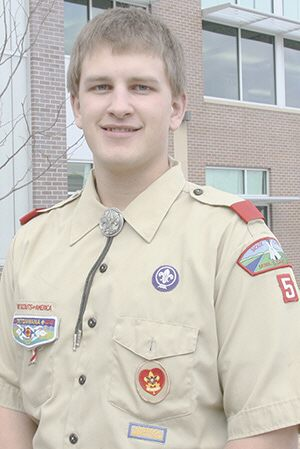 Visitors to Prairie Village may find the outdoor museum of Great Plains history easier to drive into and out of due to the efforts of a local Eagle Scout candidate.

“It had been brought up among our troop leaders that (Prairie Village) needed this job done,” Olson said. “I spoke to Stan Rauch and he thought it was a great idea.”

The project consisted of cutting the signs from plywood, mounting them on a PVC pipe as a support, and adding a wooden base. The rest of the work included painting the wood with a coat of primer and two coats of paint for the colors and lettering.

Olson, a Troop 5 member, constructed the stop and speed zone signs so they are portable. That feature allows the volunteers at Prairie Village to move the signs wherever they’re needed among the small network of unpaved streets that connect the dozens of historical buildings, agricultural displays and outdoor arena areas.

Olson said that he joined the Boy Scouts when he was in the fifth grade. His two older brothers, Andy and Aaron, were scouts and “it seemed like fun.” His older brothers are also Eagle Scouts.

“They were a top reason for joining, and there was a lot of fun along the way to where I’m at now,” Olson said.

His younger brother Austin joined the scouts about three years ago.

According to Olson, one Boy Scout trip that he especially enjoyed was a visit to Maui in the Hawaiian islands. His group spent some of its time near Lahaina, a town that started as an ancient fishing village.

“The trip to Maui in 2009 — there were the beaches, culture — everything was different from here at home,” Olson said.

Olson said that he wants to continue in Boy Scouts as an adult leader.

His Eagle Scout ceremony is scheduled at 2 p.m. on Feb. 25 at Trinity Lutheran Church in Madison.

He is the son of Steve and Kristie Olson.

Previous Post: Questers seek funds to restore P.V. carousel
Next Post: John Deere tractor to be given away during local radio promotion

* Prairie Village season passes not accepted. Concert tickets go on sale opening day – Sunday May 2, 2021 – at the gift shop. Unsold tickets will also be available at the event!