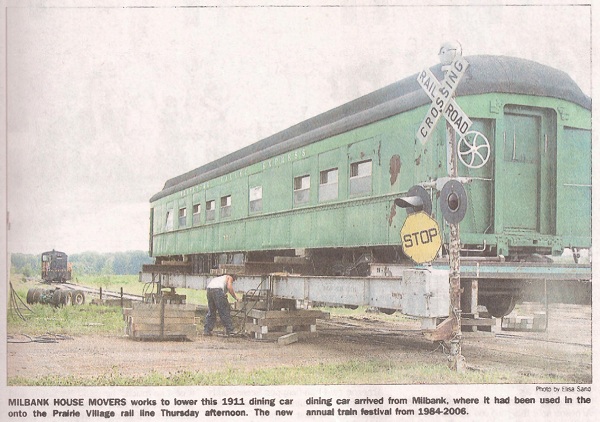 A new dining car arrived at Prairie Village on Thursday from Milbank.

Marlin Fenner, founder of the Milbank Train Foundation which was active from 1984-2006 covered about $7,000 of the $9,200 needed to haul the rail car about 110 miles. The remainder of the cost was paid by donations and some Prairie Village funds.

Fenner said the dining car was one of seven cars owned by the Milbank Train foundation and was used in Milbank”s annual Train Festival in August. It was during that time that the organization offered rides from Milbank to Corona and Wilmot. “We were noted for our train robbers and hobos,” Fenner said.

The train festival stopped in 2006, when the railroad started charging a higher price to use the line. So, after six years of sitting idle in Milbank, Fenner decided the dining car needed a new home. “I decided it”s going to come down here,” he said.

The 80-ft., 63-ton car features two dining areas a dining area complete with call buttons for the waiter; and a second dining area without call buttons. The car also features a waiter’s station and kitchen. It had four display cases that now sit inside the Wentworth Depot at Prairie Village.

The car condition, Ferlner said, but needs a little painting and a few windows replaced. Just prior to the move, he said, local youth decided to use the windows for target practice.

Fenner said other organizations are interested in the nest of the rail cars owned by the foundation. Some will go to the South Dakota State Railroad Museum in Hill City.