P.V. Jamboree is this weekend

For one Twin Cities family, restoring Massey-brand farm equipment provides enjoyment because it’s the road less taken by antique tractor fans.
The Kari-Schilling family members hauled three Massey-Harris tractors manufactured in the early 1960s and earlier for this weekend’s Prairie Village Steam Threshing Jamboree. Ben Schilling said one of the tractors, a 1949 Massey-Harris Pony, had received one last fix-up just before the family left Minnesota for the Madison historical preservation site.
“I just finished working on the Pony last night,” Schilling said. “I had to put in a new key switch.”
The family also transported to the Prairie Village event a 1962 Massey-Harris Model 55 LP propane fueled tractor and a 1932 Massey-Harris Model GP tractor. Dave Kari said that he was currently interested in collecting and restoring the “more rare stuff” when it comes to antique farm equipment.

“We were once interested in the green tractors,” Kari said, “but we stopped collecting John Deeres, because everybody has John Deere.”
The 2016 Prairie Village Jamboree features Massey-Harris, Massey-Ferguson and other Massey brands that are associated with the original company that started in Canada during the mid-1800s. Ben Schilling and his
family, wife Susan and daughters Libbie, 8, and Lucie, 5, and Dave and Pat
Kariare among this summer’s special guests. The Massey Expo of North America has made the 54th annual Prairie Village event its official gathering this summer. 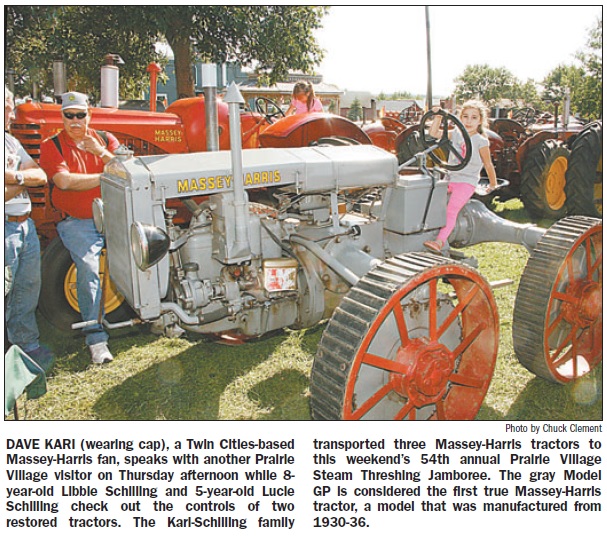 Dave Kari said the gray colored Model GP was the first true Massey-Harris tractor. The GP was manufactured from 1930-36.
“When Massey started out, they would buy other companies and put their name on those products,” Kari said. “(The GP) is the first tractor that they designed from the ground up.”
According to Kari, his family’s Model GP is one of three GPs that he knows are visiting Prairie Village this weekend. The gray Massey-
Harris tractor originally came from New York. He pointed out that the GP sports rubber treads on its steel wheels rather than the original-design metal cleats. Kari said the rubber tracks create less wear on the trailer that hauls the tractor to events.
Kari also noted that the 1949 Pony Standard was one of the field tractors from that era in which the owner couldn’t adjust the width of the tractor’s front tires. The family also brought a two-bottom plow that came from Pennsylvania.
Kari said appreciation for antique farm equipment runs through other members of the family. They have restored John Deere farm equipment and his daughter, Jen Elleraas, is a true John Deere fan. He said that his brother owns a Case steam engine that goes into use each fall when family members gather to thresh oats.