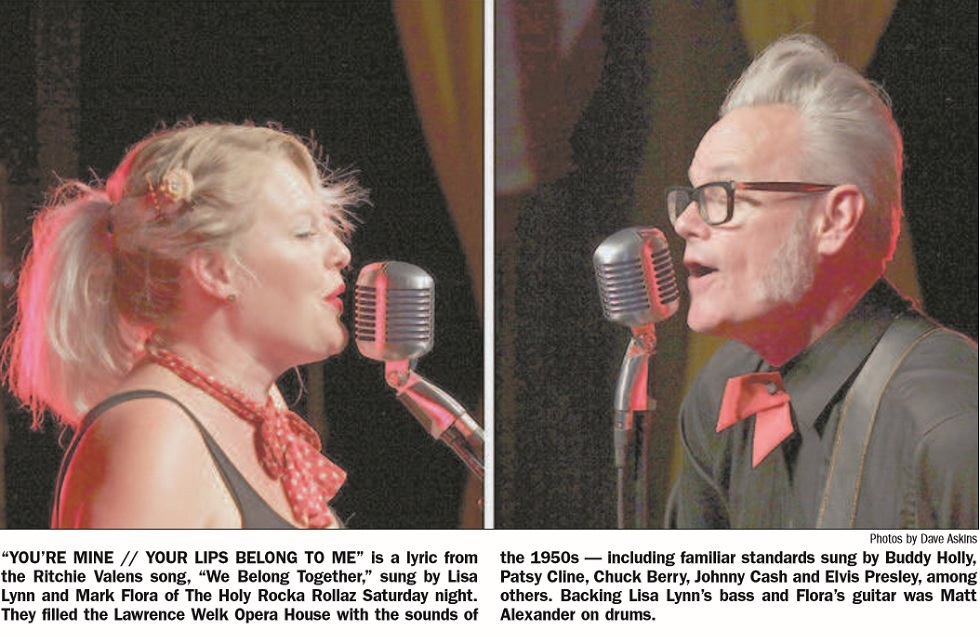 ‘There are two kinds of music, ‘Johnny’ and ‘Cash’’
By DAVE ASKINS Staff Reporter
A near capacity crowd in the 280-seat Lawrence Welk Opera House at Prairie Village rose to its feet at the end of a more than 30-song set by the The Holy Rocka Rollaz Saturday night. But they weren’t leaving. Their standing ovation demanded an encore from the trio.
Mark Flora (vocals, guitar), his wife Lisa Lynn (vocals, bass) and Matt Alexander (drums) obliged with two more songs from 1950s artists: “I Saw the Light” written by Hank Williams and “Rave On!” made popular by Buddy Holly.
The encore number written by Williams was a natural tie to the prison ministry work that Flora does. As he told the Lawrence Welk Opera House crowd, the South Dakota State Penitentiary was the first venue the group ever played.
The South Dakota connection to the Minneapolis-based band is actually deeper than that first prison venue. Lisa Lynn is from Bradley (pop. 72), about 40 miles northwest of Watertown, where her parents still run a cow-calf operation and grow corn, beans and wheat. Flora described his father-in-law as an “opinionated man” who believed there were only two kinds of music: “Johnny” and “Cash.”
That was the lead-in to Cash’s “Folsom Prison Blues.” With its opening line — “I hear the train a comin’ rollin’ ’round the bend” — the tune could have served as a kind of theme song for historic Prairie Village, which was celebrating Railroad Days over the weekend.
Flora sprinkled in vignettes from the early days of rock-n-roll in his between-song banter, including the group’s own brushes with history. Those included an occasion when Connie Valens asked if she could join them on stage to sing one of her big brother Ritchie’s songs. That story was Flora’s intro to Lisa Lynn’s rendition of “We Belong Together.”
The crowd got its first hint of Lisa Lynn’s strength as a singer just a few songs into the set, when the pair sang “Jackson” — a song popularized in duet form by Johnny and June Carter Cash. And after she had delivered spot-on renditions of Patsy Cline tunes like “Walkin’ After Midnight,” “She’s Got You” and “Crazy,” Flora told the crowd: “She can sing Patsy Cline, can’t she!”
Applause signaled the agreement of an audience well enough versed in Cline’s music that several voices called out with the correct answer when Flora asked if anyone knew who wrote the song, “Crazy,” which Cline made famous. (It was Willie Nelson.)
At one point, Flora encouraged audience members to dance in the aisles. Even if no one seemed inclined to respond to Flora’s invitation, the Opera House certainly saw its share of dancing back when it stood in Oldham, before it was moved to Prairie Village in 1970. Before the show, Mary Rook told the Daily Leader that her mother, Marie Rook, danced with Welk himself at the Opera House — then the “Socialist Hall” — and was a good enough dancer that she “took prizes.” Rook grew up in Madison but drove up to see the show from Sioux Falls, where she now lives.
Before the encore, The Holy Rocka Rollaz concluded their regular set with a song Flora called the “greatest rock-n-roll song of all time:” Chuck Berry’s “Johnny B. Goode.”