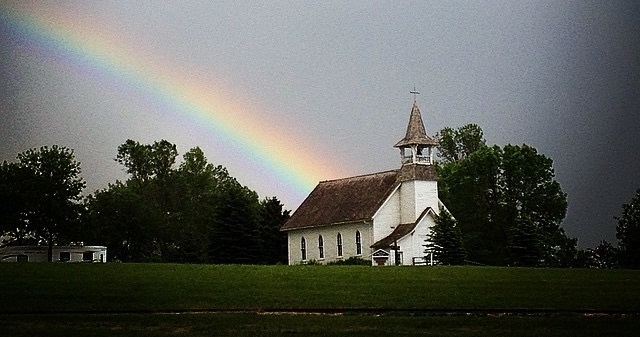 This church was founded, had its cornerstone laid, and was dedicated during the summer of 1906 in the community of Junius, SD. Membership was originally Methodist Episcopalian, but the church soon became the religious center for the entire community.

As early as 1876 people were meeting in private homes in the area for worship. Reverend John Oakley arrived to serve as pastor in 1906 and preached in the Hammer School until the completion of the church. In 1911 the parsonage and church barn were completed. Soon after Reverend and Mrs. Ebert arrived with their prize horse-driving team.

The automobile made it possible for the members to attend larger churches in other communities, and eventually the church closed its doors in Junius. E.N. (Ben) Sorenson purchased the church and donated it to Prairie Village. In July 1967 the church was moved to its present location on the village grounds.

Mrs. Susie Vickere (deceased in 1979) served as a pastor in the church at Junius. She also served on the first board of trustees established for the church’s new home at Prairie Village. Reverend Vickere was a resident of Madison.

Church Furnishing Were Donated By

Mrs. Lewis Bogue:   Alter, Rug and A Bible in memory of her father Mr. Wood. Her parents were the first couple to be married in the Church, August 18, 1910.

Come back soon and watch this page grow!!
Back to the History Page.