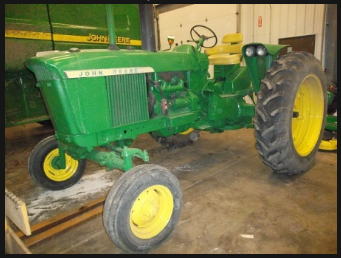 Fifty years ago, John Deere unveiled its 3010 tractor as part of the company’s 50th anniversary. It was the same year that the Steam Threshing Jamboree began near Madison, South Dakota. In 2012, the two are coming together to commemorate the 50th Anniversary of the Steam Threshing Jamboree at Prairie Village, two miles west of Madison, and one lucky person is going to drive away with a 1962 reconditioned 3010 tractor. The 2012 Jamboree is featuring John Deere equipment, and tens of thousands of people will attend the four-day event. A celebration this big deserves a giveaway to match, and that’s why KJAM Radio-Three Eagles Communications of South Dakota, James River Equipment of Madison, and Prairie Village have teamed up to give away the tractor on Sunday,  August 26th during the Steam Threshing Jamboree at Prairie Village.

As part of the promotion, listeners will be able to register to win the tractor during several summer events in and around Madison and throughout eastern South Dakota. KJAM Radio will do live broadcasts at events and businesses, encouraging listeners to come and see the tractor and register for a chance to win. All of the events, times, and dates will be listed on KJAM Radio’s website at www.amazingmadison.com. At each event, ten semi-finalists will be drawn. Those semi-finalists will need to be present at the giveaway at Prairie Village on August 26th to win.

Joyce Hyland, KJAM Radio Sales Promotion and Coordinator, said “This promotion was created to raise the awareness of the 50th Anniversary of Prairie Village and bring thousands of people to the Madison area. By giving away a $20,000 restored 1962 John Deere tractor, this could be one of the largest marketing promotions that KJAM Radio has ever put together.”

Rodger Menn, General Manager at James River Equipment in Madison, said this promotion was a natural fit for his business. “The employees of James River Equipment in Huron and Madison are proud to be involved in helping Prairie Village celebrate 50 years of dedication and commitment to preserving Madison’s agricultural heritage. It seems appropriate to celebrate this 50th anniversary that James River would restore and donate a 1962 John Deere 3010 tractor to commemorate this outstanding community event.”