Persons having a familiarity with farm equipment know about Massey-Ferguson tractors and probably have seen the vintage Massey-Harris farm equipment, but falling among the more obscure are the Massey-Ferguson Ski Whiz snowmobiles that the company manufactured and sold during the 1960s and ’70s.
However, the Ski Whiz snowmobiles aren’t obscure to Jason Johnson, a Belle Plaine, Minn., resident, and his family and friends. Johnson, 29, owns and enjoys about three dozen operating Massey-Ferguson snowmobiles that he keeps at his Minnesota home, and he transported a small fleet of Ski Whiz machines to this past weekend’s Prairie Village Steam Threshing Jamboree. 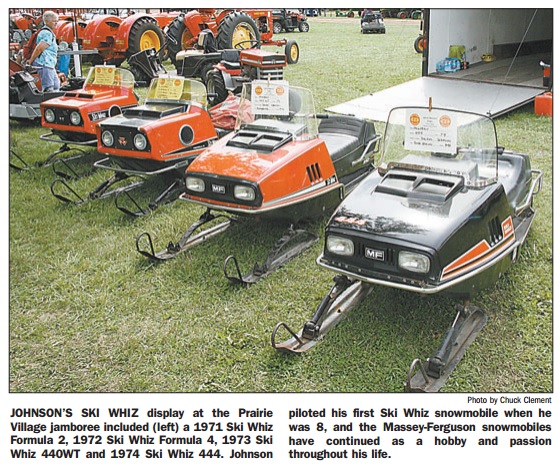 His mother, Wendy Johnson, said Jason started his snowmobile enthusiasm at age 8 when he started riding his first Massey-Ferguson Ski Whiz.
“He’d just drive it around and around the house,” Wendy Johnson said. “He’s very passionate about the Masseys.”
Jason’s first snowmobile was a model 380 Ski Whiz, which date back to 1968. When he was a boy, Johnson sold the
snowmobile “..because it had electrical issues.”
“I sold it when I was 12 or 13, and when I was 24, I wished that I had it back again,” he said.
Johnson’s first Ski Whiz found its way back to him at age 26. He estimated that he has about about 100 to 125 snowmobiles in his collection.
“I don’t sell Masseys, but I sell other brands…They’re my favorite vintage sled,” Johnson said.
Johnson works in commercial truck repair, doing body repair, fabrication “…and a little bit of painting.” He finds the vintage snowmobiles at farm sales, auctions and “…just through word of mouth.” Johnson said the sleds that he buys are typically neglected after spending years sitting in a shelterbelt or pasture.
Massey-Ferguson built its snowmobiles under its own Ski Whiz brand from 1968 to 1974 in a former Firestone plant in Des Moines, Iowa. From 1975-78, Massey-Ferguson arranged t o have the Scorpion snowmobile brand provide machines for sale through the farm equipment company.
According to Johnson, Massey-Ferguson had problems making a profit with its snowmobiles. When agricultural producers made a major purchase from a Massey-Ferguson dealership, they’d ask the dealer to add a free snowmobile into the transaction.
At the threshing jamboree, Johnson included in his Ski Whiz display a 1971 Formula 2, 1972 Formula 4, 1973 440WT and 1974 444. Atkins said the Formula 2 on display was one of the 125 units manufactured for that Ski Whiz model. Johnson and Atkins are still looking for a Formula 1 Ski Whiz.
Ski Whiz Formula 4s were built with twin carburetors, but the twin carburetor engines experienced maintenance problems in which the carburetors would go out of synchronization. When that happened, Johnson said one piston in the twin-cylinder engine would provide most of the engine power. He added that when the snowmobiles were returned to Massey-Ferguson dealers, the mechanics would modify the engines to run on a single carburetor. 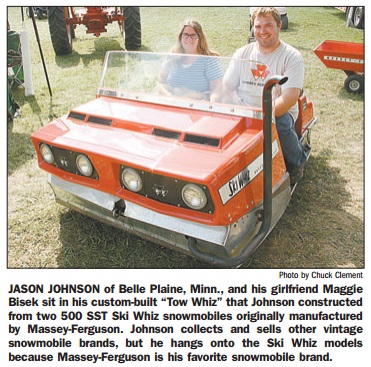