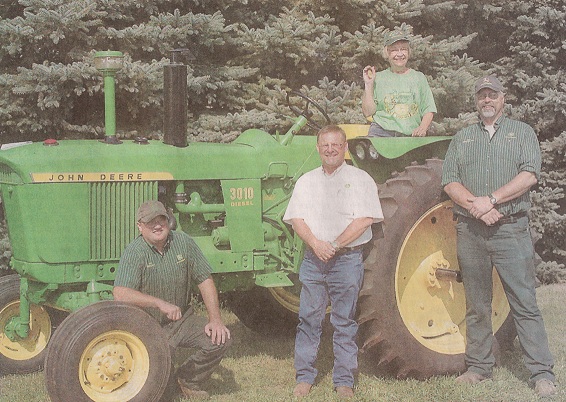 The day Esther Hyland came home from entering her name in the drawing for a 3010 tractor, she told her husband Ray the contest was over because she was going to win.

That prediction came true Sunday, when Hyland was the first of 10 finalists drawn in a raffle. Each of the finalists had two chances spin a wheel and reach a score of 50. Hyland, of Nunda, was one of three who achieved that task; the others were Merle Peterson of Madison and Fred Olinger of Salem.

Representatives from James River Equipment delivered the tractor to the Hyland farm near Nunda on Monday morning (today).

“This is my retirement present to myself,” Hyland said. She officially retried as Nunda”s postmaster on July 31.

Employees at James River Equipment spent hundreds of hours restoring the 50-year-old 3010, tractor, which had been found in Lockwood, Minn.

“It was in fair shape,” said service manager Dan Kuyper.

The restored tractor was donated to Prairie Village for its 50th anniversary Steam Threshing Jamboree, held this weekend. It traveled a circuit of 60 locations this summer where anyone had a chance to enter the raffle at no cost. Finalists had to be present at Prairie Village to win. More than 530 finalists were on the grounds Sunday afternoon.