High humidity made Sunday feel warmer than the 82 degrees the thermometer read, but that didn’t stop car enthusiasts and gear heads from heading to Prairie Village for their 21st annual Car Show.

Manager Stan Rauch reports that there were 92 vehicles in this year’s show. That is the largest number of cars in the seven years Rauch has been with the village, so he concluded that the show “was a big success.”

There were 12 categories and a People’s Choice Award, which went to Jim and Jean Eykamp of Oldham with their 1958 Buick convertible, complete with the appropriate accessories of fuzzy dice hanging from the rear-view mirror and a drivein’s car hop tray on the driver’s side window.

Other winners included:
Street rod to 1949, Jeanne Dooley and Virgil Hanson of Garretson with their 1923 red Ford Model T replica. The vehicle was reminiscent of the Herman Munster car.

Tuners, cars to 2010 modified, Morgan Bartell of Brookings with a 2013 White Suburban WRX.

There were no entries in the foreign motorcycles category.

The village now has just under three weeks to prepare for the 52nd annual Steam Threshing Jamboree Aug. 22- 24. 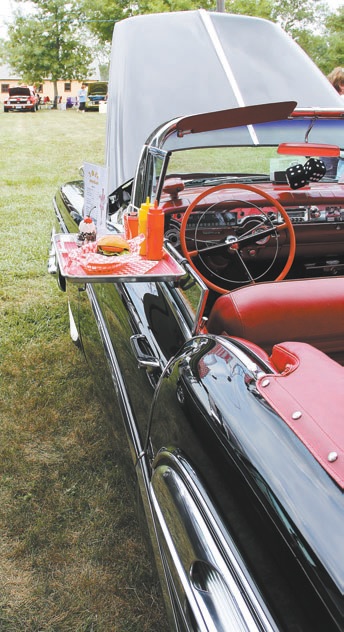 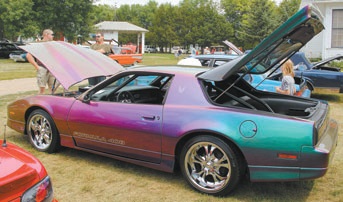 Photo by Jane Utecht
A WOODY S-10? Yes, this truck is built on an S-10 frame, but Howard and Joyce Soine of Belgrade, Minn., used wood for the body, including cedar headlights and handmade side mirrors, plus inlay eagles on the spare tire cover and box cover. The log chain on the front is also hand carved from a cedar tree branch. The truck took second place in the 1980-2010 pickup category at the Prairie Village Car Show. 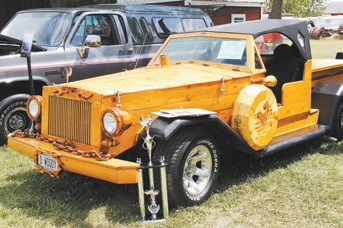 Photo by Jane Utecht
IRIDESCENT SHINE The winner in the 1980-1999 car category at Sunday’s Prairie Village Car Show was Justin Busch’s 1988 Pontiac. He calls the car “Chrome Illusion,” but the paint color’s technical name is “absolute purpleen.” Busch said he did the body work on the car, his boss put on the color, and Busch finished with the top lacquer coats.