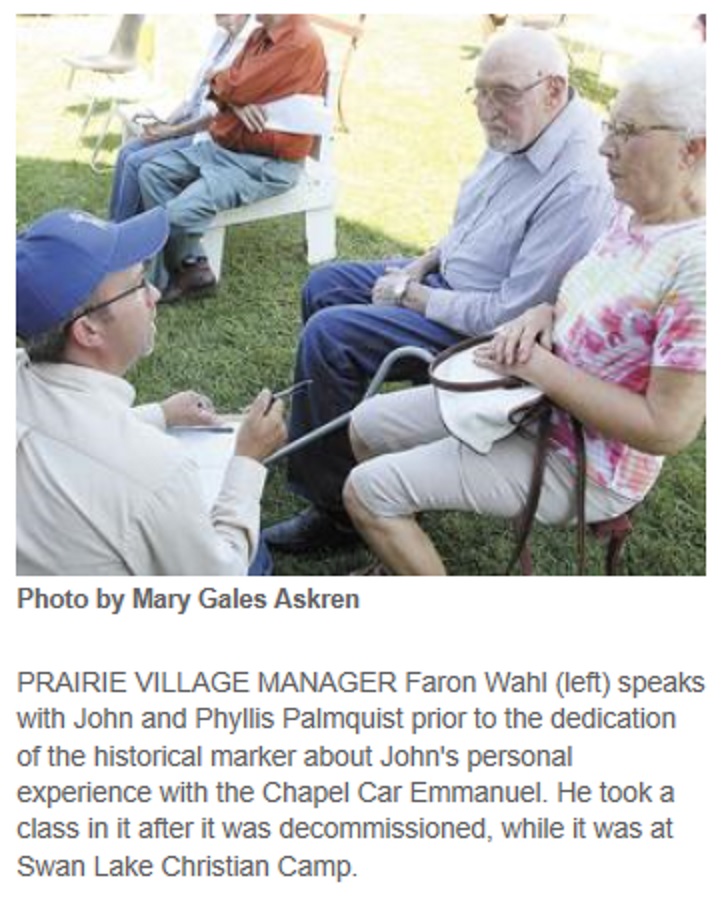 People also gathered on Sunday to honor that history at the worship service in the Chapel Car Emmanuel and at the dedication of the historic marker after the service. As part of the Railroad Days festivities, the 125th anniversary of the dedication of the Emmanuel was marked.
Prairie Village Manager Faron Wahl reminded nearly 50 people who attended the dedication what life was like for those whose missionary zeal prompted them to board the chapel cars in the late 19th and early 20th centuries and minister from the sidings in towns known as “hell on wheels.”
“It was a tough life for them,” Wahl said.
The railroad moved the cars at no charge, which also meant the pastors aboard — frequently single men — were moved at the whim of the railway. They might find themselves in a town for a few days or for as long as a month.
The leading local businesses in many of these towns were saloons, which did not welcome the civilizing influence of the Gospel message.
“As churches came west, they were resisted by saloon owners,” Wahl reported.
However, that resistance was not universal. Others in those towns welcomed the spiritual sustenance the chapel cars brought.
“Folks came by the throngs,” Wahl said. “Reports are they packed 150 kids in there for Sunday School. It would seat 90 adults.”
He also talked about the living conditions the missionaries — also known as colporteurs — endured. The space was limited and the sidings where the cars were parked would have been in the rougher parts of town. And, since the cars were not insulated, weather conditions would have been felt in both winter and summer.
Among those in attendance for the worship service and dedication was Marilyn Barger. Her efforts, as well as the efforts of numerous other volunteers, helped to restore the chapel car after it was recovered from a salvage yard in 1972.
“I spent quite a few summers down here,” Barger said, explaining how she dismantled the windows to strip and refinish them.
Also in attendance were John and Phyllis Palmquist, whose family has long ties to Prairie Village. However, John’s connection to the Chapel Car Emmanuel predates its arrival at Prairie Village.
The car was dedicated in 1883 and retired in 1942. At that time, it was purchased by the South Dakota Baptist Convention and used at Swan Lake Christian Camp near Viborg until around 1955. While it was at Swan Lake, John attended camp and took a class in the chapel car.
During the 49 years it was in service, nine missionaries served aboard the Chapel Car Emmanuel. While she never visited South Dakota, her sister, the Chapel Car Glad Tidings, did visit Clear Lake, Watertown and Elkton in 1904. Two of the three Catholic chapel cars also visited the state early in the 20th Century.
Wahl provided an update on all 13 chapel cars that were constructed, indicating that one of the Catholic cars, the Chapel Car St. Paul, and two of the Baptist cars — in addition to Emmanuel — the Chapel Car Good Will and the Chapel Car Grace, have survived intact.
The worship service held in the Chapel Car Emmanuel prior to the dedication was especially apropos with a reading from Mark’s gospel about Jesus sending out the twelve. The Rev. Conrad Krahling, who led the service, focused on the importance of faithfulness in the life of the Christian.
“In all of the life of the gospel, we are called to be faithful,” Krahling said. “We may be successful or we might not, but we are called to be faithful.”
The service closed with the two dozen people in attendance singing a song written for the dedication of the Emmanuel by Samuel Francis Smith, who recycled the melody from his well-known patriotic song, “My Country ‘Tis of Thee,” also know as “America.” It speaks of bringing peace and of traveling over mountains to the distant sea. Stanza two ends with an inspiring confidence: “Thy errand will not fail, God moves with thee.”
As the service ended, Kelli Wollmann, who has been instrumental in obtaining grant funding for the restoration, thanked people for attending and reminded them that “Emmanuel” means “God be with us.” She placed the chapel car in historical context by noting it was in use at a time when 25 million people came to the United States and “the West was not won.”
She expressed excitement about worshiping in a place that was constructed to bring the church to the people.
“I think it’s the greatest thing since popcorn,” she said.
In his presentation, as part of the dedication, Wahl described the Chapel Car Emmanuel as a “narrow slice of American history,” but with his dedication, he brought the focus back to all of the people who have been involved with it over the years.
“This historic marker is hereby dedicated in honor of those who dreamed of the chapel car concept,” he said, “those who funded and built Emmanuel, those who made possible movement for Emmanuel throughout the western United States, and most of all those who served as missionaries on Emmanuel, enduring terrific personal challenge and hardship in bringing the Gospel to those locales most void of it — and furthermore dedicated in forward commitment here at Prairie Village to the thoughtful preservation of history and accurate, studied portrayal of that history to citizens of the coming generations.”