Railroad Days held at Prairie Village
By CINDY BILKA Contributing Reporter
The combination of warm, sunny days and the Fourth of July holiday guaranteed a busy weekend at Prairie Village and lines of people at the village’s annual Railroad Days. Five rides were available, so it was occasionally difficult to decide which to ride first.
Trackless train rides, sometimes called kiddie train rides or barrel train rides, were available for free at the gift shop. On both Saturday and Sunday, volunteer Mark Bakker could be seen weaving through the streets. These rides were up in the air for a while on Sunday morning after the ball bearings in three wheels were found to be unsafe, but a quick trip to Ace Hardware for replacement wheels and the ride was up and running again. 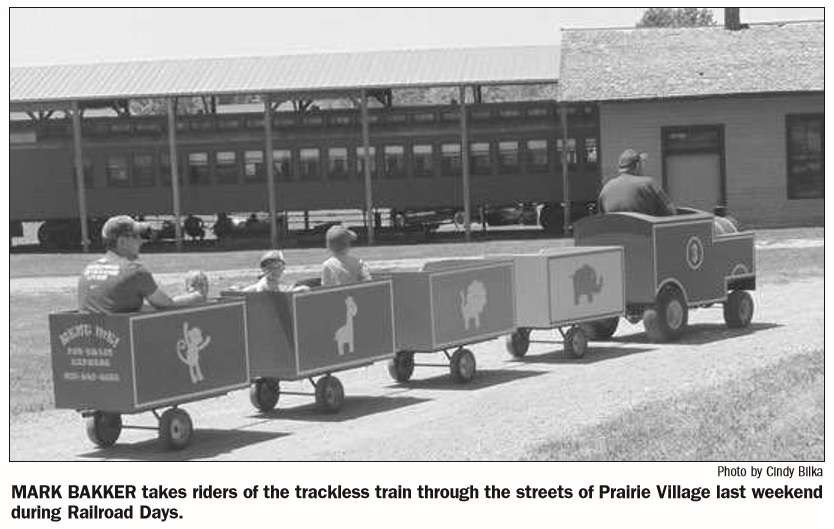 At the roundhouse, free rides were available on a 1 1/2″ scale train. The roundhouse also had model railroad displays. Visitors could closely examine the large diesel engine 4002, the little Wilhelmine Victoria and other railroad stock that wasn’t in use.
For those who wanted to ride the rails, motor cars, also known as speeders or puttputts, were options for those who wanted nothing between their heads and the bright sky. The Doodlebug with its attention to period detail and bright fittings was a popular ride that brought some visitors back for a second day. 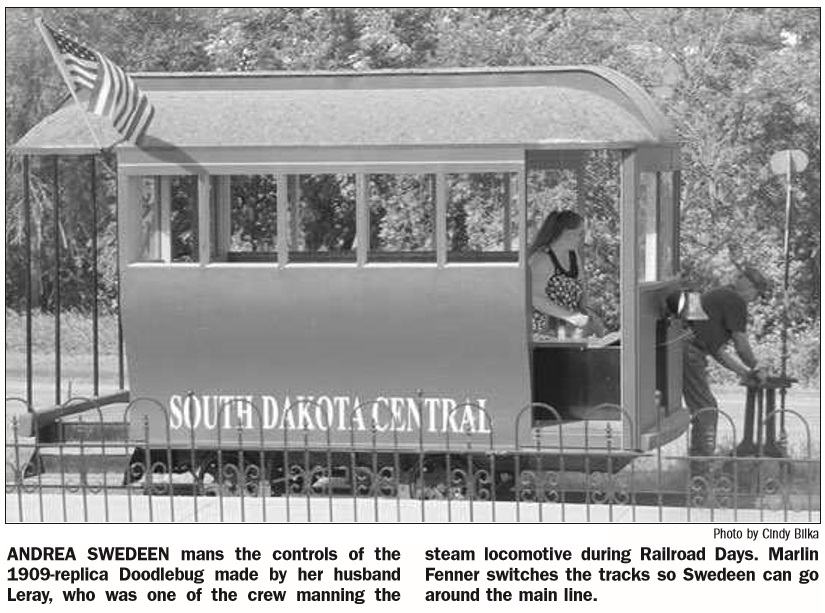 Steam engine #29, the only operating steam locomotive in eastern South Dakota, was the most popular ride. In its two days of chugging around the track, it carried 622 riders. Rides started at 11 a.m., but for the crew manning the engine, their work day started before 7 a.m. each day. Firing the boiler, building up steam and doing a number of safety checks are all part of the procedure before riders are allowed on board.
This was the first train ride for many riders. The eyes of the younger ones would widen when they heard the steam whistle or the iconic chuggachugga sound of the engine as the train went up a grade. Others, such as a boy named C.J., have been riding the Prairie Village trains for years — old-timers who still sport big, ear-to-ear grins as they sway to the rhythm of the rails.
Paul Simon once said, “There’s something about the sound of a train that’s very romantic and nostalgic and hopeful.” That’s the allure of the railroad at Prairie Village, the allure that draws riders from around the country.
On Monday, the 2 p.m. were provided by motor cars. As railroad committee chairman Janice Fenner explained, “It’s our time to play. Motor cars are just fun!”
On Tuesday, a train ride was offered, powered by the blue diesel-electric engine.