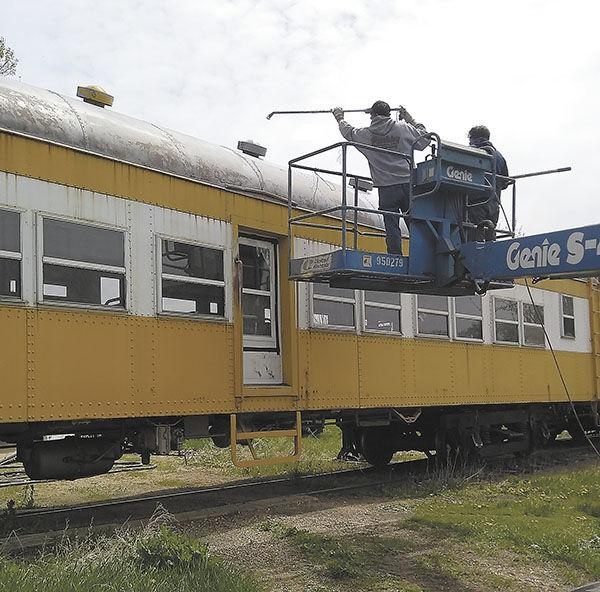 The threat posed by COVID-19 kept the gates of Prairie Village closed on Mother’s Day weekend, the traditional opening weekend. Too, school closures prevented hundreds of children from swarming over the grounds throughout the month of May.

However, behind the scenes, work continues to ensure visitors will have a quality experience when the gates swing wide and visitors are once again welcomed to the living museum later this year.

“It’s a rare ill wind that blows no good,” volunteer Bob Gehringer said philosophically, referring to the unique opportunity the late opening has provided to work on the railroad’s carriage cars.

In a normal year, the cars would be in use now as children from around the region climbed aboard the Prairie Village, Herman and Milwaukee Railroad to experience a form of transportation which might have been familiar to their ancestors, but which quickly became obsolete when the automobile was introduced. This year, with no children learning about the state’s history by visiting the grounds, the cars remained parked on the siderail, providing an opportunity to make repairs.

In recent years, restoring two steam engines so they can be used has been the focus of the volunteer committee which has assumed responsibility for the railway. Currently, the 35-ton No. 11 is in pieces awaiting a new boiler. Constructed in 1924, the engine was being converted from coal-burning to oil-burning when committee members became aware of issues which needed to be addressed.

“When we started doing the work for the conversion, there were some leaking staybolts,” Gehringer explained.

Cutting out the staybolts brought to their attention the thinning walls of the firebox. One thing led to another, and the decision was made to replace the boiler, tubes, shell and firebox. Not only was this the most cost-effective option, but it was also the best alternative from the perspective of safety.

“It’s done to modern standards, so it should last another 100 years,” Gehringer said.

The old boiler was removed in the spring of 2019. The company which is constructing the new boiler hopes to complete work on it this year. No deadline has been set for getting the locomotive operational.

While work on the No. 11 is being done remotely, work on the five carriage cars used to carry people is being done at Prairie Village. The first step in the project, which is being completed this week, involves repairing the roof on each car.

“Basically, the roof is giving way and leaking on all the cars we use for people,” Gehringer indicated.

While the cars range in age, the oldest is the Whetstone Valley Express dining car, which was constructed in 1911 and is used each year for the dinner train during the annual Steam Threshing Jamboree. While structurally sound, the cars have been affected by time and weather, which removed the tar coating protecting the roof when each was built, according to Gehringer.

“Because it’s basically a wooden structure, if we want to save it, we have to seal it,” he explained.

This is especially true since the cars are stored outdoors and are not protected from the weather. A leaking roof will not only stain the walls but also could harm the floors in the carriage cars.

“The floors are wooden on a lot of the cars and standing water could cause that to deteriorate,” Gehringer said.

The work is being done by NIJAC Roofing and Insulation, a company based in Sioux Falls. Most of their work involves coating grain silos, according to Chuck Masloski, company owner. However, the company also works with metal roof restoration and grain elevator repair.

He considers the work on the historic train cars to be unique, but not totally outside the company’s scope of experience.

“We do a lot of metal roofs for big manufacturers who don’t want to shut down,” Masloski said.

The process for preserving the roofs of the carriage cars involves three steps. First, the NIJAC crew sandblasted previous coatings from the cars. After that, leaking spots were repaired.

“Overall, they weren’t as bad as I assumed they would be,” Masloski observed.

Once the leaks were repaired, the entire surface was coated with foam and sealed with an elastomeric coating. This type of sealant is used for roofing repairs because it adjusts to temperature changes by stretching and contracting, making it not only versatile 000but also durable. Maslosko said it will last a minimum of 15 years.

Gehringer said the railroad committee has plans to continue work on the carriage cars as time and resources permit. One goal will be to have the cars painted.