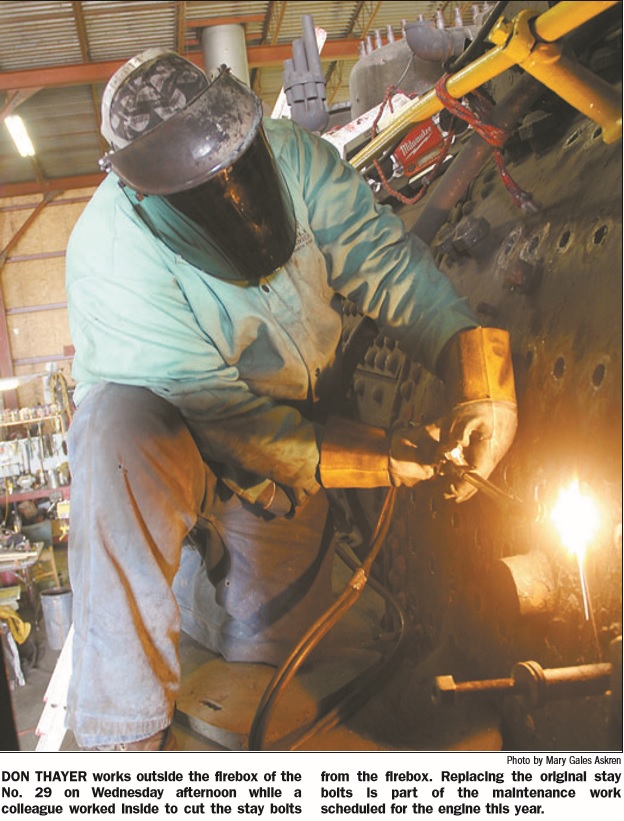 Trains will be running by summer


School trips are already being scheduled — a sure sign that spring is here — but the steam engines at Prairie Village will remain out of commission until sometime this summer.
Work begun over the winter months on both the No. 11 and No. 29 is scheduled for completion by the Fourth of July and Railroad Days.
However, with more maintenance than anticipated now required on the No. 11, volunteers are keeping their fingers crossed.
“It looks more likely that 29 will be done than No. 11,” volunteer Bob Gehringer said.
At the present time, Don Thayer, a member of Boilermakers Local 647 and an employee of Wrigley Mechanical of Fargo, N.D., is part of a two-man crew removing the original stay bolts from the No. 29 firebox in order to replace them. Because the 1944 engine was non-operational for a number of years, Thayer said, the stay bolts had begun to rust, which weakened them.
Rows of stay bolts, which are essentially metal rods, are used to prevent the boiler plates in a steam engine from cracking or exploding. In 2015, not only the stay bolts but also the backsheet were replaced in the lower portion of No. 29’s boiler.
Replacing the firebox stay bolts is not the only work that Wrigley is doing on the No. 29 this year. Thayer was here earlier this winter to cut the tubes out of the boiler. Local volunteers then removed the tubes, which were sold.
“The tubes heat up the water. They had a bunch start leaking,” Thayer said.
Before the tubes are replaced, Diversified Rail Services will sandblast the interior of the boiler and coat it to prevent rusting, according to Gehringer. Hopefully, that will be done when the pistons on the No. 11 are installed.

The pistons were removed and sent to be machined earlier this year after Gary Bensman, a steam locomotive restoration contractor from Georgia, determined they were leaking steam, which prevented the engine from operating efficiently. Bensman is also working with volunteers to convert the engine from coalburning to oil.
When he was in Madison earlier this year, he brought brick for the firewall. However, when the firebox was inspected before the firewall was constructed, the need to replace the stay bolts in the No. 11 was obvious.
Consequently, the decision was made to replace the sidesheets and backsheet as well. Thayer will be providing an estimate for that project before leaving Madison later this week.
“They’re the ones certified to weld it back up, and we have a relationship with them,” Gehringer explained.
Because this work was not anticipated, he said, there may be a delay in getting the No. 11 back on the track.
Volunteers hope that when Thayer returns to install the tubes on the No. 29, he will be part of a four-person team which will also take care of the stay bolts and other work on the No. 11. If not, the No. 29 — with 290 tubes to be replaced — will be the priority.
Because working on steam engines at Prairie Village is a fallback job for Wrigley, the work is done at the company’s convenience rather than by a specific deadline. Recognizing this, volunteers have realistic expectations.
Regardless of when the work is done, once completed, both engines are expected to operate well. Thayer said stay bolts and tubes can last for decades, depending upon use.
“Barring tiny, little things, these should be good to go,” he said.