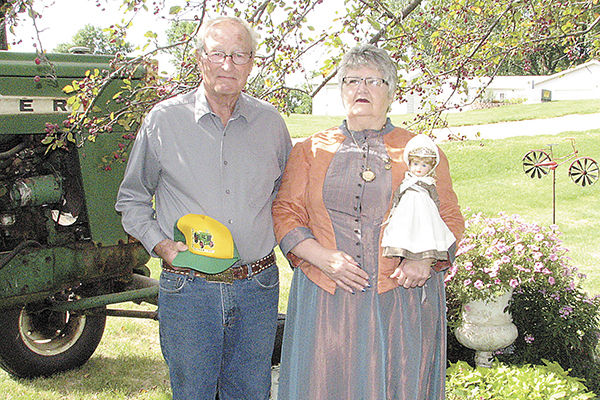 Photo by Chuck Clement
KEN & KAREN BECKER will serve as the 2014 royalty for this summer’s Prairie Village Steam Threshing Jamboree. The Beckers volunteered at Prairie Village from the preservation site’s beginnings with Karen serving as manager for 2 1/2 years. She’s holding one of the first Prairie Village commemorative dolls (named Melissa) that’s part of her large doll collection. Ken Becker is standing next to his Model 1800 diesel-powered Oliver tractor that he continues to use to maintain the gravel road leading to their Lake Herman home. Oliver tractors are the featured brand for the 2014 jamboree.

By CHUCK CLEMENT, Staff Reportercourtesy Madison Daily Leader
If royalty is supposed to duly represent the institution that it’s been crowned by — whether it means choosing a king and queen for a school homecoming or a nation — then Prairie Village has done the right thing in naming Ken and Karen Becker as the 2014 royalty for this summer’s threshing jamboree.
The couple, who live on the west side of Lake Herman, were present when the threshing jamborees started during the 1960s and volunteers were first assembling the first buildings, tractors and other historical artifacts that Prairie Village currently preserves.
The Beckers have witnessed the growth and changes at Prairie Village, partly because they’ve always lived in the Madison area and partly because they had joined the membership of the local preservation group almost at the beginning.
“We didn’t become members until the second year,” Karen Becker said.
Karen Becker grew up in Madison, and Ken was raised on an area farm.
During the early 1960s, the first threshing jamborees were held on farmland in Lake County, but the annual events had grown to a point where, in the mid-1960s, the jamboree organizers decided the gatherings should have a home on the east side of Lake Herman near Madison.
To make the site special, the organizers decided to re-create an 1890s-era Great Plains community called Prairie Village.
At Prairie Village’s start, men and women became members by donating items for display at the historical preservation site and volunteering their time to establish the institution.
According to the Beckers, Prairie Village involvement was and is a wide-ranging family thing. Karen served as a Prairie Village manager for 2 1/2 years, but at its start, her father, Galen Crosby, helped place the first historical buildings at the preservation site.
“My dad helped move the first buildings in there…pulled them onto the grounds with his pickup,” Karen Becker said.
Crosby will serve as the 2014 grand marshal during the threshing jamboree this weekend.
The Beckers’ daughter RaeLynn was chosen as Miss Prairie Village in 1987.
And then there are Ken Becker’s tractors. He judges that he has about a dozen rebuilt tractors stored at Prairie Village. The retired Sunshine Foods produce manager basically admits that restoring tractors can turn addictive.
“It gets into your blood, and you just can’t quit,” he said.
The Beckers said that RaeLynn appeared in the first tractor parades at Prairie Village when she was an infant. Their sons, Rick and Troy, grew up driving the Becker tractors during the parades. Rick Becker also volunteers during the annual Prairie Village auctions.
Ken and Karen now have seven grandchildren who are either involved in farming, tending to horses or active in sports.
Ken and Karen Becker plan to appear in as many of the 2014 threshing jamboree parades as they can. Between those parades, Karen wants to serve as a hostess at the site’s sod house.
“And he’ll be up there with his tractors,” she said.
Karen Becker said the item at Prairie Village that holds the most sentimental value to her is the old carousel with its wooden horses. That’s because her mother, Eunice Crosby, dedicated her time to selling ride tickets at the attraction.