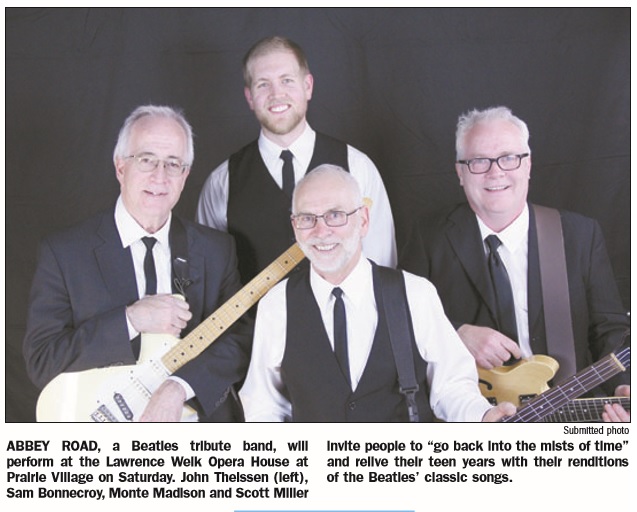 Beatlemania swept the world in the 1960s, changing one ranch kid’s attitude toward music forever.
Monte Madison, the founding member of Abbey Road, hadn’t even heard of the Beatles and was failing his high school music class when the group appeared on Ed Sullivan in 1965. He’d even argued with his music teacher about his grade, saying, “This is not something that I will use in my whole life.”
Then, the Fab Four appeared on Ed Sullivan and Madison’s world shifted on its axis. He said he was sitting on the floor and his jaw hit the ground when they began to perform.
“This was music I’d never heard before,” he said.
After that, Madison was hooked. Before long, he was playing in cover bands and music was his life, but he wasn’t making the kind of music he wanted to make.
“It was always on my heart to play in a Beatles tribute band,” he shared.
It took decades for him to find a group of musicians who shared his vision. However, for the past 19 years, Abbey Road has been re-creating the Beatles sound for fans.
Over the years, band members have changed, but the goal has always remained the same: to create an authentic, live concert, Beatles music experience. To achieve this, each band member is responsible for one part.
Madison does Paul McCartney’s parts. Scott Miller does George Harrison’s vocals and plays lead guitar. Mark Theissen does John Lennon’s vocals and plays guitar.
A new member has recently joined the band, percussionist Sam Bonnecroy. He replaces Tony Johnson in performing Ringo Starr’s parts. “No one can look like the Beatles.
“No one can sound like the Beatles. We just want to do the best job we can,” Madison said.
Their best job pleases a lot of fans. Faron Wahl, Prairie Village manager, said he invited the group to return this year because of reviews he heard last year as concert goers left the Lawrence Welk Opera House.
“We had a lot of people who said, ‘That’s the best concert we’ve ever heard’,” he said.
Abbey Road will perform on Sunday at 7 p.m. at the Lawrence Welk Opera House. Tickets are $20 in advance and $25 at the door.
With fewer than 280 seats in the Opera House, Wahl recommends people call in advance to make reservations. While Prairie Village has never had to turn anyone away, the possibility always exists that they will sell out the house.
They almost did so for the Prairie Village Pageant this year. Wahl estimates there were not more than 25 or 30 empty seats in the auditorium.
“We had the biggest crowd we’ve had since I’ve been here,” he said.
That was a boon in a year when the weather has impacted attendance at other events. The number of consignments and the number of bidders were down this year at the annual consignment auction. Similarly, the number who attended the Northern Bull Riding Tour was down this year.
“So many of our attendees are local ag producers,” Wahl explained. “Anybody that could be out in a field to do anything was out there.”
To encourage people to come out and enjoy the entertainment available in the climate-controlled historic Opera House, Prairie Village is offering a special concert promotion this year. With the purchase of six tickets — whether that involves two for every concert, six for one concert or some other combination — concert go-ers will be entered into a drawing for what Wahl described as a “lollapalooza grand prize package.”
Valued at over $400, the grand prize includes everything from train rides and carousel rides to gift shop merchandise. One of the most attractive items, however, is an on-grounds parking space during the 2019 Jamboree.
In addition to Abbey Road, the concert series includes Redhead Express on July 6 and Jason Brown on July 20. Four sisters form the Redhead Express and indicate their musical influences range from mountain music to rock, and that their music defies classification. Jason Brown is a country singer-songwriter from Iowa.
Wahl said he’s intentional about booking variety in order to appeal to the widest possible audience.
“There’s a lot of folks in the area who love country. There’s a lot of folks that love oldies,” he said to illustrate his point.
Madison said Abbey Road is very much looking forward to returning to Prairie Village, primarily due to the audience response last year.
“It’s not just about Abbey Road. It’s the crowd and the band and the people we meet,” he said.
Band members make an effort to engage the crowd prior to the show, talking to people and helping them to find seats. It’s that engagement with the audience that makes the experience satisfying for band members.
“When I look at the crowd, I would say, ‘You are the music. We are the band’,” Madison said.
Tickets can be reserved by calling 605-256-3644.