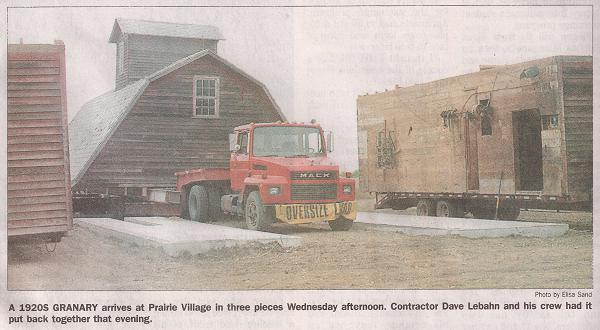 A turn-of-the-century granary that will showcase grain handling equipment from the 1920s arrived at Prairie Village west of Madison on Wednesday.

The granary, which originally sat in the northeast corner of Lake County near Nunda, was purchased by Prairie Village and moved to the grounds this week — just in time for the 50th
Anniversary Steam Threshing Jamboree.

Board members have been working on the project for most of the summer. Board member Kent Petersen said the project nearly stalled when officials were told it would cost another $10,000 to drop power lines to move the structure to Prairie Village.

Petersen said that’s when contractor Dave Lebahn spoke up and suggested they move the-building in three pieces instead of one. Those three pieces of the building arrived Wednesday afternoon
and were reassembled by evening.

The granary is a barn-shaped structure with a corn crib on one side and grain bins on the other side and overhead. Its set-up allows for someone to pull in the middle and unload grain for
storage in one of the bins.

Petersen said the granary was found by Myron Downs, who was keeping an eye out for a 3-hp hit-and-miss engine for Petersen. Downs found the engine attached to the granary.

“I’m glad it came to the village because this is where it should be,” Downs said.
“Once it’s together, it will be quite a showpiece.”

Petersen said the John Deere engine dates back to the late 1920s. It runs a shaft
that operates a bucket elevator and wagon hoist within the granary.

Built prior to the 1930s Depression, Petersen said the granary is probably the
only one of its kind in Lake County.

“I can remember seeing literature on these things,” he said. “It’s neat the way it’s
put together.”

Although the building is now together, Petersen said quite a bit of work is needed
yet to get all the equipment back in the granary Once the elevator is reassembled later
this week, he said, one last section of concrete will be poured.

Petersen anticipates the granary will be fully operational for the 2013 threshing jamboree.

“I think it will be a good piece,” he said. “It was so far ahead of people in terms of
grain handling equipment. This guy was way ahead of his time.”