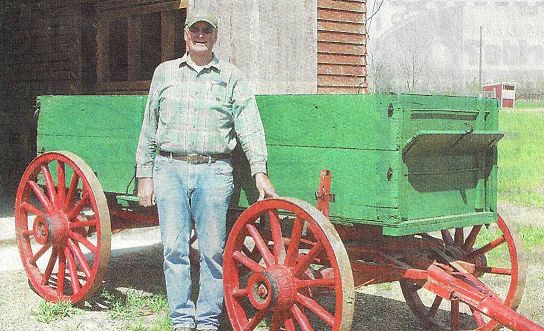 RODNEY URBAN stands in front of this 1900s-era grain wagon brought to South Dakota by his grandfather and his grandfather’s brother.
By ELISA SAND Staff Reporter Madison Daily Leader

A turn-of-the-century wagon has arrived at Prairie Village.

Rodney Urban of Sioux Falls donated the wagon, which dates back to at least 1899. The wagon was brought to Ellis from Carroll, Iowa, by Urban’s grandfather William and his grandfather’s brother, Fred.

“It’s been in the family ever since,” Rodney Urban said. “My father was the last to use it.”

Urban said the wagon sat unused for several years and was occasionally moved from one building to another. He decided to donate the wagon after he visited Prairie Village for the 2012 Steam Threshing Jamboree. It was there he saw the 1920s granary which had recently been donated, and he visited with Prairie Village Board Member Kent Petersen about his plans for the building.

That granary originally sat in the northeast corner of Lake County near Nunda. The granary has an original John Deere mechanical system that moved the grain throughout the building. Petersen said he’s working to get that equipment working again.

Urban said he rebuilt that floor of the wagon’s box prior to bringing it to Prairie Village.

“It’s a great addition,” Petersen said. “It fits right in with the granary.”

Petersen said the wagon is typical of the type of wagon that would have been used with this granary, although some wagons would have boxes that were wider at the top.